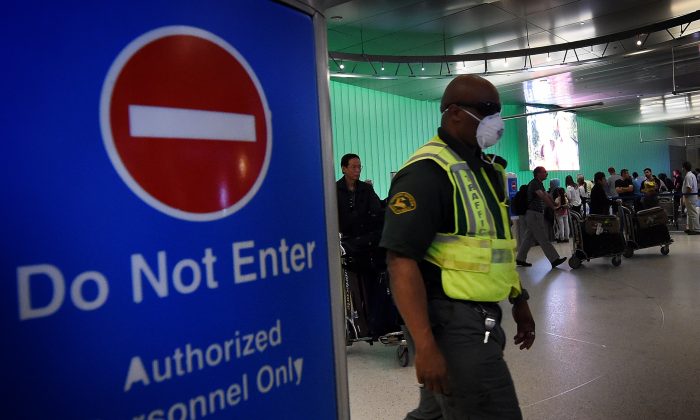 An airport worker wears a protective face mask in the arrivals area of the Los Angeles International Airport on Oct. 9, 2014. (Mark Ralston/AFP/Getty Images)
US

Meanwhile, passengers are being warned of delays out of LAX, The Associated Press and the Los Angeles Times reported.

Patch.com, however, reported at 10:50 a.m. local time that passengers were allowed back into LAX following the evacuation.

LAPD bomb squad has cleared the incident at T7. Please contact your airline for the latest flight status. #LAXincident

Incident in T6 has been cleared. Incident in T5 & T7 are being investigated. If flying out of T5/T6/T7 pls contact airline for flight delays

All clear at T5 & operations are returning to normal. Pls contact your airline for flight status. #LAXincident

Flight delays at Terminal 6 are said to be particularly severe, the report said.

“People should definitely check with their airlines especially if they are on an airline that is flying out of Terminal 6,” LAX spokeswoman Mary Grady told Patch.com.

The suspicious bags at the terminals were cleared, she said.