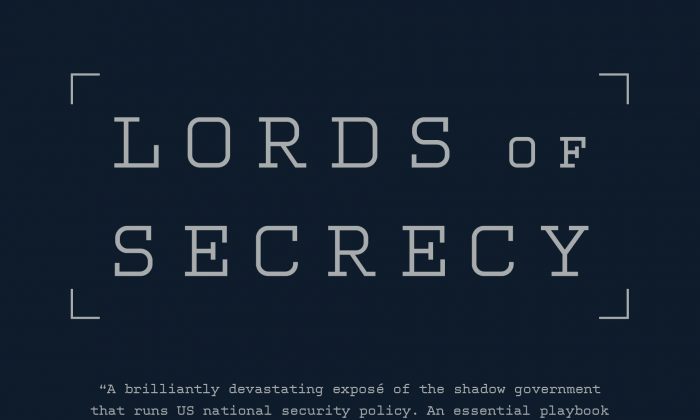 Like the runaway BP Oil Spill, the U.S. National Security drone program has exploded in scope, proliferating so many state secrets that it’s corroding the rule of law and undermining foreign policy.

For BP and its subcontractors they raced to cover up the sprawling disaster. They shredded data, low-balled spill estimates, and sank the truth by using toxic dispersants to gum the oil in a thick black carpet that stretches for miles at the bottom of the gulf. The oil spill cost lives, careers, and billions of dollars in fines, penalties, and lost revenue, with legal motions still wending its way through the courts today.

Scott Horton, author and humanitarian lawyer, in his new book, Lords of Secrecy (Nation Books), lays out the opportunity costs to the United States that are harder to quantify.

The Columbia University law professor weaves a convincing story. He ties the United States’ unholy trinity of the CIA rendition program, the military’s overuse of Blackwater contractors, and the rising drone program under the monolithic cloud of state secrecy.

New information about Germany’s complicity in the drone program, with the U.S. using Ramstein Air Force Base as the spine of the drone relay system, brings Germany’s 2002 Code of Crimes law into the fold of stealth warfare, according to an April 17 article in Glenn Greenwald’s The Intercept.

In Lords of Secrecy: The National Security Elite and America’s Stealth Foreign Policy, Scott Horton delivers the goods on many fronts. In covering two points of the stealth triangle upfront, he focuses his sights on how the evolution of the U.S. drone program, from spying on terrorists to targeting and killing them with surgical strikes, has run amok.

“There has been a consistent pattern in the Middle East on the use of drones for covert war. The Department of Defense no longer leads the engagement, the CIA does,” Scott Horton said in a telephone interview. “But there is a fundamental problem with that. What is tactical versus what is strategic? What are we trying to achieve over a ten-year horizon?”

He understands the use of drones as a tactical platform to kill the enemy in remote places. But a decade in with hundreds of Hellfire missiles fired, the U.S. drone program has mushroomed out of control, with no public debate and little congressional oversight, while not being tied to any foreign policy strategy.

“There have been three major studies. Ten years, 300 strikes, with three to four thousand casualties. Not all of them were terrorists or legitimate targets,” he said. “Yes, statistics have shown drone strike collateral damage has gone down. We’re better at it. But for the CIA to make absurd claims that women and children are terrorist targets is ridiculous.”

Horton added, “To justify each drone strike legally and string it out for years doesn’t work.”

Blowback of the ‘Deep State’

This month, a Pakistan court gave the go ahead for ex-CIA station chief Jonathan Banks to face charges for a drone strike that killed a Pakistani family in 2009. They outed Banks’ secret involvement in the U.S. drone program in December, forcing the CIA to pull him out of Islamabad, according to The Guardian.

“Pakistan is not a theater of war, and as such drone strikes that kill innocent people are not easily covered by the rule of law,” Scott Horton said. “The War Powers Act of 1973, which focuses on an imminent threat to national security, is a stretch there.”

In Chapter Four, “The Rise of the National Security State,” Horton highlights the history from World War II to the end of the Cold War, and wonders what happened to the “peace dividend” that should have followed in the 1990s. The growth machine of perpetual war serves the deep state, not national interests or long-term security.

In the chapter, he writes: “Resistance to accountability dialogue lies with his powerful figures in both political parties who endorsed the flawed case for an invasion of Iraq and would be embarrassed by revisiting it.”

Scott Horton said on the phone, “The National Security State is very clear a bureaucratic apparatus. Powerful. Autonomous. They control the decisions, but in a strong clash with democracy.” He noted the military deep state of Turkey, “with its façade of elections,” that, if left unchecked, one day could “short-circuit our democracy.”

In Lords of Secrecy, chapters from “Bureaucracy and Secrets” and “Drones and the Art of Stealth Warfare,” to “Drowning in Secrets” and “The War on Whistleblowers,” hit the mark on the corrosive, inimical power of keeping too many secrets.

In the Age of Transparency, with mobile phones and big data analytics, it’s becoming harder to hide those secrets and contain their fallout when they are fully exposed. The dozen police brutality incidents of the past year bear out this new reality.

The only criticism—and it’s a small one—of Lords of Secrecy is the author spent too much ink on legal and policy history dating back centuries to America’s founding, particularly in Chapter Three, “Bureaucracy and Secrecy.” Where that device often works to provide context to a subject, in Lords of Secrecy it strips the power of well thought out arguments, of the debris field emanating from the War on Terror, which was born this side of 9/11. There is more than enough legal material in the wars in Iraq and Afghanistan for the author to stay in the fluid present.

On the Middle East with the unraveling of Yemen, Syria and Libya, Horton said, “President Obama is trying to pivot away from national security with its obsessive focus on Iran initiatives, and pivot the United States toward East Asia to stop the drain of money and resources.”

That would be a major break from the U.S. oil-driven myopic policy in the Middle East the past sixty years.

The existential threat that Scott Horton sees to the United States comes from within. He highlights the litany of unintended consequences that secrecy spawns in chapter three subheading: “Secrecy is a Form of Government Regulation.”

Anyone in or outside the legal profession who doubts the unfettered growth of the U.S. security apparatus, with ramifications beyond NSA whistleblower Edward Snowden’s intel dump to the public, should read Lords of Secrecy.

The future of U.S. national security lies in the fabric of laws. Thus, the U.S. needs to strive for more transparency and foster public debate on strategy, instead of erecting opaque walls of secrecy.