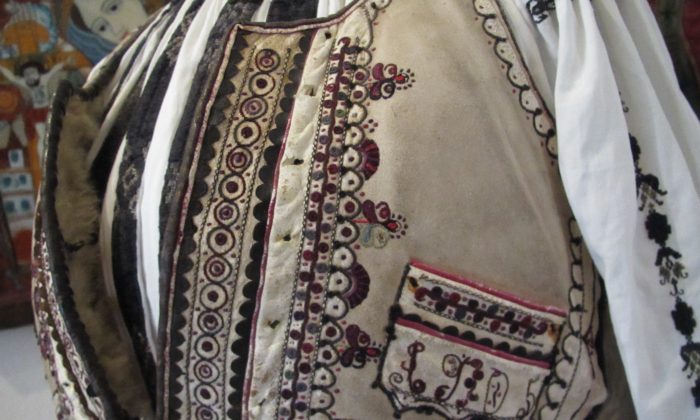 There was a time before everything came wrapped in plastic; when every stitch on a shirt told a story; when sitting around a fire was a history lesson, catching up on news, quality time with the family, and bedtime story all wrapped into one. The ebb and flow of the seasons connected everyone to the land, and the land connected people to each other and to themselves.

I am in Romania traveling by bus between the town Sibiu, ranked as Europe’s eighth most idyllic place to live by Forbes, and the other Transylvanian town of Oradea—my hometown. As always, I’m on the lookout for all things traditional, including a “cojoc.”

A cojoc is the Romanian name for a sheepskin vest embroidered on the white, leathery side with colorful traditional motifs. It is the kind of thing that takes months to sew and is handed down through generations.

The bus is crammed full of people and without air conditioning. The lead-footed driver slams on the brakes to make the hairpin turns through the mountains.

Maria, a 50-something widow from the village of Jina is sitting next to me. She is a youthful, strong-looking woman who wistfully tells me that she misses the old days.

“I used to look forward to winter time when we would start the ‘claca’—a meeting of women who sit together for hours on end sewing and sharing stories,” says Maria. “Now we don’t meet up anymore. Now everyone stays at home in front of the TV.”

I ask her what, in her opinion, is the reason people don’t wear or make traditional clothes any more.

She answers indirectly by saying that she has her own “ie” (pronounced eeyae), an embroidered linen blouse that took her months to complete. But she keeps hers wrapped in paper and hardly ever wears it. She cannot envisage taking the time to make another one, and the one she has is too precious to wear often.

Back in Oradea, my friend and neighbor 37-year-old Dan Barhoata is unique due to the fact that he wears traditional dress when he goes out on the town. He is fascinated by Romanian history and all things traditional, having written a book about design motifs that appear on local arts and crafts.

He wears only the white shirt and wide leather belt that has no strident ornamentation, yet even with this most unassuming traditional dress he gets double-takes. It takes guts for him to walk into a crowd of young people who are dressed in jeans and T-shirts with irreverent designs that cater to the Western concept of being cool.

“Going out with my shirt and wearing the wide leather belt means exposing myself—like someone in a fashion parade. As soon as I leave the house, there are already suspicious eyes on me, thinking: ‘Which century did you come out of?’ But I wear it for two reasons: In the first place, I like it, and secondly, I consider it my duty,” says Barhoata.

According to Barhoata, the reason traditional dress is disappearing just about everywhere in Europe, is the homogenization of cultures, the so-called globalization.

“There is no longer an ethnic identity. The collective cultural memory is being erased by things that are in fashion, that look good to the modern eye, while everything that is specific to a people, to a culture, is disappearing,” he says.

He mentions village life that was the wellspring of traditions. It was a closed society where novelty was not accepted. But the closed circle was broken when someone left and returned with new tools, as well as new values that affected the rules that served the community for centuries past.

Village life used to be simple—albeit very busy—and there was little time left to luxuriate in hobbies. But the time spent on weaving and sewing one’s dowry was sacrosanct. Women from the whole village would sit around the fire on long winter nights and sew together while they shared stories and village news. Unknowingly, these kinds of interactions were the very social glue that held the community together and allowed for common values to be upheld for the new generation.

Painter Witta von Larcher spent 30 years growing up in the picturesque medieval town of Sibiu. She was part of the large Transylvanian Saxon community that migrated from Germany in the 12th century. Like many, she still speaks the Old Saxon language, and she has spent her life gathering traditional Saxon motifs.

She has transposed these motifs to her leather-craft, using them to decorate wallets and bags for everyday use in the hope of preserving them.

Von Larcher holds little hope for the survival of traditional dress and customs: “In the future, I think that traditional costumes will be kept in museums, and they will only be used by folk dance groups and for the sake of showcasing traditional culture to tourists. But I don’t think that the traditional day-to-day dress will ever be worn again as it used to be,” said von Larcher.

Among other reasons she cites a change in lifestyle priorities that has touched most countries.

“Every individual is trying to simplify their life as much as possible when faced with the hardships of mere survival. So in this context, traditional dress has lost its [cultural] value,” she said explaining further that instead of weaving their own fabrics out of natural fibers like wool, cotton, and linen, people now reach for things that are mass-produced and often made of artificial fibers.

Back on the bus, I told Maria from the village of Jina that I had just been to her village festival. I told her about my quest for the cojoc and my flabbergasted reaction to see that at the festival market there were rows of stands stacked full of plastic flip-flops, hats, T-shirts—and everything was made in China.

There was a milliner selling traditional hats and stands selling Romanian cheeses and special foods, but nobody was buying anything except beer and BBQ meat. I could have been anywhere in the world were it not for the scenery that reminded me that I was, after all, in Romania.

Maria looked at me, amused. She understood and agreed with my point of view, but her everyday struggle to survive was written on her face. To her I was a spoiled ex-pat: I had the luxury of philosophizing about how things should be, while being able to return with dollars to spend at my leisure before going back to a relatively steady job and assured future in New York City.

The reality is that globalization, the Internet, and high-speed travel has made borders all but disappear with it. The essence of what it used to mean to be a particular nationality has being diluted.

Added to this homogeneity is the flood of cheap imports from China. There, its system of unpaid labor through labor camps has obliterated any manufacturing that upholds ethical work practices. Not even remote villages like Jina have escaped its momentum.

The quest for my cojoc continues. Maybe one day I will find it, at which time I will have to ask myself how, where, and when I will actually dare to wear it.