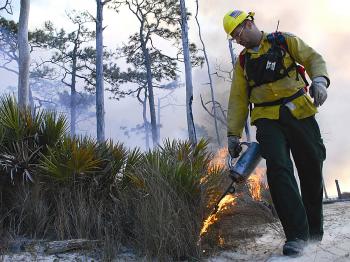 FIRE REQUIRED: The longleaf pine must have fire to complete its life cycle. Seeds only germinate after fire. (Courtesy of National Wildlife Federation)
US

By Mary Silver
Print
A native pine could improve the land and help the people who inhabit it. Groups say this tree can save jobs, resist climate change and aid the poor in Southern states.

Leading the push to restore the longleaf pine (Pinus palustris) is America's Longleaf Initiative. The Southern Company, a large utility, several colleges and universities, and the National Wildlife Federation (NWF) conservation group are among its members.

The NWF released a report last week calling for a major effort to bring back the ancient tree. They believe this pine could deliver benefits to people in a variety of ways.

Not only would the tree offer a useful cash crop of pine straw and valuable longleaf wood, but experts say it would also provide a richly diverse habitat, hospitable to deer, quail, gopher tortoises and many other animals.

The longleaf forest harbors as many species as the Everglades or the Pacific rain forests. Turkey, deer, and quail can thrive in the special ecosystem the tree provides. In turn, these animals can provide food, while hunting and tourism can provide jobs.

“We are working with state and federal agencies to support private landowners in both technical support, as well as cost share and direct payments to minority landowners for restoring longleaf pine forests,” said Tom Darden of the Longleaf Alliance in an email.

Darden said the group is making new efforts to reach minority landowners and involve them in the preservation effort.

In Ecology of a Cracker Childhood, Georgia author Janisse Ray writes a lyrical and impassioned call to rebuild the once vast forests. Darden admits her book “has helped build the momentum of interest in Longleaf, but is one of many efforts to advance this effort.”

Stronger than the now-dominant loblolly and slash pines, the mighty Longleaf can withstand high winds far better than these other pines according to the report, and they withstand flooding.

The longleaf not only resist forest fires, they require fire to germinate. The natural process of low intensity fires in the longleaf forest could prevent devastating fires like those of 2007, in which over 40,000 acres in the southern states burned.

Lumber companies had planted the non-native varieties because they grow fast. Yet these comparatively weaker varieties have proved vulnerable to the pine beetle.

The longleaf, however, is resistant to the pine beetle, with wood far stronger than that of the loblolly and slash pines. Its open form allows sunlight to reach the forest floor, so that understory plants such as lilies and blueberries can thrive.

In the nineteenth century, longleaf pine forests dominated the southeastern United States. Logging and development have reduced its range to 3 percent of what it was 100 years ago.

To view the report, please visit: