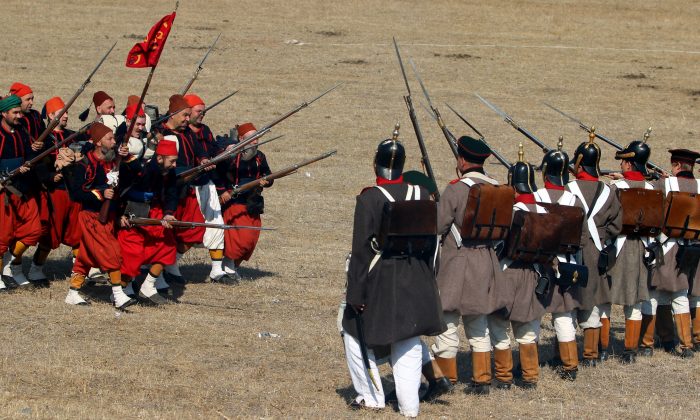 Members of historical clubs, wearing historical military uniform, take part in the re-enactment of the Battle of the Alma, outside Sevastopol, Ukraine, on Sept. 28, 2014. The Battle of the Alma (Sept. 20, 1854), which is usually considered the first battle of the Crimean War (1853–1856), took place just south of the River Alma in Crimea. (Yuri Lashov/AFP/Getty Images)
Opinion

There was no shortage of heartfelt pledges of support for Ukraine’s embattled government from diplomats, officials, scholars, and journalists earlier this month in Kyiv at the 11th annual gathering of the Yalta European Strategy conference, or YES, a kind of Davos East. But as conferees nibbled on canapés and raised glasses to Ukraine’s valiant struggle against Russian aggression, evidence mounts that Ukraine is likely to remain alone in its existential struggle for freedom and sovereignty.

In Donetsk and other towns and villages in the war-torn east, some 450 miles from the capital, fighting continued between Ukrainian-government and Russian-backed rebel forces, despite the 10-day-old cease-fire, the heart of a peace plan whose prospects depend almost entirely on Russian President Vladimir Putin’s intentions.

In a keynote speech, European Commission President José Manuel Barroso announced that the European Union was delaying the implementation of part of its free-trade pact with Ukraine to which Russia objects. The amended pact was approved by the EU and Ukrainian parliaments.

Ukrainian lawmakers also approved two other laws intended to shore up the country’s fragile cease-fire with the rebels after five months of conflict in which 3,000 have died. But the laws, which grant amnesty to rebels who have not committed war crimes and temporary autonomy to the regions of Donetsk and Luhansk, much of which pro-Russian separatists now control, are widely seen as further concessions to Russia.

When I asked President Barroso whether he had discussed Ukraine’s pleas for more assistance with President Obama during the recent summit of the North Atlantic Treaty Organization in Wales, he said that they had done so in “corridor talk,” an allusion to subjects of lesser priority.

“He’s a very nice man,” Barroso said of the American president. “For the moment he’s very busy with ISIS,” a reference to the ISIL extremists whose land grabs in Iraq and Syria and shocking made-for-video beheadings have diverted U.S. and international attention from Russia’s annexation of Crimea and invasion of eastern Ukraine.

Much of the $70 million that Washington pledged to Kyiv months ago in “nonlethal aid”—such as flak jackets and Meals-Ready-to-Eat—has not arrived. Obama has ruled out providing armored personnel carriers, missiles, and other “lethal aid” that Ukraine President Petro Poroshenko has requested.

Nor has Ukraine had much luck in buying arms from other potential suppliers. Israel’s Channel 2 reported Monday, and an Israeli official confirmed, that its government, too, has refused to sell Ukraine drones and intelligence equipment made by the private firm Aeronautics. According to the report, Israel’s Foreign Ministry quashed the deal that the Defense Ministry had earlier approved after meeting with a Ukrainian delegation here. Israel reportedly feared angering Moscow, which has tentatively agreed not to sell S-300 antiaircraft missiles to Iran and Syria.

Most European states also oppose providing military aid to Kyiv, which is not a NATO member and won’t likely become one. Many of the conference participants, even President Poroshenko, said that there was no military solution to Putin’s challenge, that the only hope of reclaiming seized territory and staving off further losses lies in diplomacy. Few participants saw any prospect that future YES conferences would be held, as they have been for the past 10 years, in Yalta in the Crimea, which Russia annexed in March.

One Western diplomat called Putin an “arsonist pouring gasoline to light fires everywhere.” This is a “Russian conflict, not a Ukrainian conflict,” he said, noting that the conflict’s silver lining has been a surge in Ukrainian nationalism throughout this country of 45 million, even among those whose first language is Russian.

Putin’s goal in Ukraine, another diplomat said, is to keep the government “off-balance” to maximize Russian control. Another argued that Putin now sought the destruction of Ukraine’s government. “He’s like a spurned lover. If he can’t have Ukraine, no one else will, either.”

Still another predicted that despite a third round of European and American economic sanctions that have targeted Russian oligarchs as well as the nation’s defense, financial, and oil and gas sectors, causing $100 billion in capital outflow and a plunge in the value of the ruble, Putin would try to seize more Ukrainian territory, either directly or through its pro-Russian separatists, if the opportunity arose. “I don’t think he’s done yet,” said Pierre Lellouche, a member of the French Parliament’s foreign affairs committee.

Svyatoslav Vakarchuk is Ukraine’s Bono, a popular musician who served briefly in parliament. He said that the conflict was really between two governance models—the “safety and stability” being offered by Moscow versus the “freedom” model that brought over 1 million people into the Maidan, Kyiv’s main square, last November after then-President Viktor Yanukovych refused to sign a trade deal with the EU. Yanukovych’s backtracking on this pledge, among other autocratic moves, sparked months of protests that led to his ouster last February.

But Ukrainians have also been disappointed by the failure of his successor, Poroshenko, a wealthy businessman and Ukraine’s so-called “chocolate king,” to carry out pledges to end his country’s pervasive corruption, reform its elections and bureaucracy, and spur economic growth.

Anders Aslund, an economist with the Peterson Institute for International Economics, in Washington, said that Ukraine’s economic situation was dire and in a “pre-default state,” with Gross Domestic Product falling over 7.5 percent in a year. Poroshenko wants to abolish 64 out of 83 regulatory agencies, Aslund said, but he hasn’t done so, and in any case he should eliminate 72.

The president should “fire corrupt judges,” stop spending 10 percent of GDP on energy subsidies, and 18 percent of GDP on pensions—many of them for retired generals and thousands of other members of the old elite—and halt the export of machine parts for weapons to Russia. Ukraine’s debt to GDP ratio was “not sustainable,” Aslund said.

New elections, which Poroshenko hopes will strengthen his hand, are scheduled for the end of October. But divisions within his pro-Western ruling coalition also emerged at the conference. While the president insisted on a diplomatic solution to the conflict with Russia, his prime minister, Arseniy Yatsenyuk, struck a decidedly different tone.

Yatsenyuk declared that Putin wanted to conquer “all of Ukraine” and said that only NATO military backing could save his country. Ukraine is “in a state of war with Russia,” he said. Poroshenko and Yatsenyuk have grown farther apart since the prime minister tried to resign from Parliament in July, which Parliament rejected. But Yatsenyuk announced over the weekend that his party would run separately from Poroshenko’s in October.

The disputes over how to respond to Russia and what kind of government Ukraine should have dominated the two-day security conference, created and sponsored by Victor Pinchuk, one of Ukraine’s wealthiest businessmen and philanthropists, who has seen his own steel-pipe exports to Russia stopped by Moscow due to his pro-Western stance.

Poroshenko will come to Washington to address a joint session of Congress and meet with President Obama on Thursday. His visit is being described as an effort to highlight Ukraine’s predicament and the need for American military and political support in fighting that has already claimed 3,000 lives and could easily escalate further. But the Obama administration shows little sign of yielding on the issue of lethal aid. “We do not see a military solution to the crisis in eastern Ukraine,” a State Department spokeswoman said yet again this weekend.Judith Miller is an adjunct fellow at the Manhattan Institute, a Fox News contributor, and a contributing editor of City Journal . This article originally appeared on the Manhattan Institute’s City Journal website.