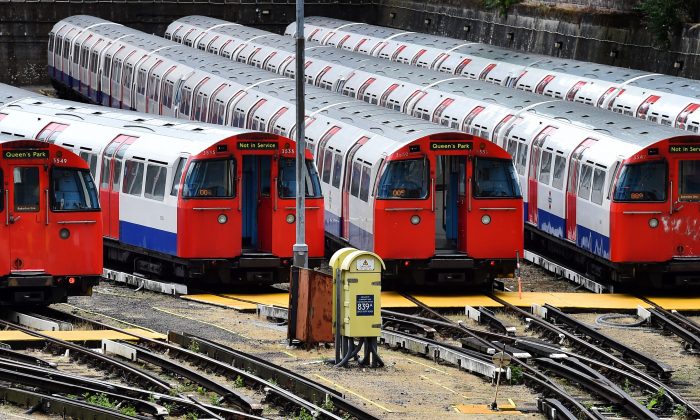 Tube trains are parked at the Bakerloo line depot in London on August 6th, 2015 during a strike by Underground staff over plans to run trains all night at weekends. Weekend 24-hour services will be launched on the Central and Victoria lines from August 19th. (BEN STANSALL,BEN STANSALL/AFP/Getty Images)
UK

All-night services on London’s Underground trains will be launched for the first time in August, the city’s new mayor said on Monday, May 23rd, despite union protests against the move.

The long-awaited 24-hour services will be launched on August 19th on two of the network’s 11 lines on Friday and Saturday nights before being rolled out more widely.

“The Night Tube is absolutely vital to my plans to support and grow London’s night-time economy – creating more jobs and opportunities for all Londoners,” said Sadiq Khan, who was elected as London’s mayor earlier this month.

“The constant delays under the previous mayor let Londoners down badly.”
Round-the-clock services were due to start last year but were delayed by disagreement between unions and transport authorities over pay and conditions for staff, prompting a wave of strikes.

Mick Cash, general secretary of the Rail, Maritime and Transport (RMT) union, said it still had “major concerns over the safe running of the Night Tube”.

He added that, while the union supported the introduction of all-night trains, the service “cannot be delivered on the cheap”.

The first all-night services will come on the Central and Victoria lines and will be extended to the Jubilee, Northern, and Piccadilly lines later this year.

A 2014 study by economic consultancy Volterra Partners for London’s transport authority and London First, a business campaign group, estimated that 1,965 permanent jobs would be supported by the Night Tube.