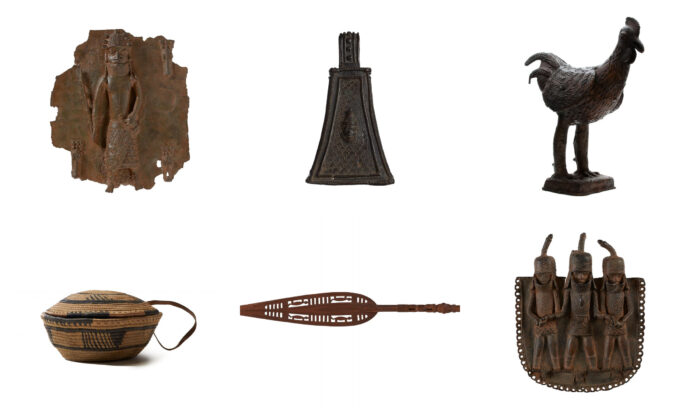 Undated handout file photos of artefacts the ownership of which are to be returned to Nigeria. (Horniman Museum)
UK

The UK’s Horniman museum announced on Sunday that it will return the ownership of 72 Benin City artifacts to the Nigerian government, making it the first taxpayer-funded British museum to do so.

The south London museum said the objects were “forcibly removed from Benin City during the British military incursion in February 1897,” the year in which the British Empire annexed the Kingdom of Benin, now a part of southern Nigeria.

The collection is comprised of 12 brass plaques known as Benin bronzes and other objects including a brass cockerel altarpiece, ivory and brass ceremonial objects, brass bells, a key “to the king’s palace,” and household items such as fans and baskets.

The ownership of the items will be transferred to the Nigerian government, but talks over loan agreements are expected to take place, meaning some items may stay on display at the Horniman museum for some time.

The Horniman said it consulted with community members, visitors, schoolchildren, academics, heritage professionals, and artists based in Nigeria and the UK, and considered “the future of the Benin objects” as well as their “provenance.”

Eve Salomon, chair of the trustees of the Horniman Museum and Gardens, said “the evidence is very clear that these objects were acquired through force, and external consultation supported our view that it is both moral and appropriate to return their ownership to Nigeria.”

Salomon said the museum is “pleased to be able to take this step” and looks forward to “working with the NCMM to secure longer-term care” for the artifacts.

“Agreeing to the Benin bronzes doesn’t mean that every claim for every Victorian and Edwardian object in museums will be agreed,” the Horniman chief executive told The Sunday Times.

“These extreme examples of looting or the taking of sacred items that should never have been removed from their context are likely to be agreed in terms of returns.”

Thousands of items from Benin City are now scattered in museums around the world, including more than 900 at the British Museum. The Benin bronzes are one of the most contentious items at the museum, second only to the Elgin Marbles, which the Greek government has tried to recover for decades.

On Oct. 27 last year, Jesus College, Cambridge became the first institution in the world to return a Benin bronze, followed by the return of one other bronze a week later by the University of Aberdeen.

The Horniman museum’s decision to transfer ownership was approved by the Charity Commission, the government body for charities including museums.

The commission is also expected to consider whether or not it will authorise the return of 213 other Benin City artifacts by Oxford and Cambridge universities, which received NCMM’s repatriation request in January. Both universities have said they support the claims.

According to the Sunday Times, ministers appear to have softened their approach to contested colonial-period artifacts.

The paper quoted Arts minister Lord Stephen Parkinson as saying it was not for government to “tell the museums what the right or wrong decision is” and that any restitution claims should be made “case by case, item by item.”

“There are at least two sides to every argument. The job of historians and museums is to faithfully represent all of those sides and let people make their decisions. A lot of people are concerned that we rush to moral judgment about the past,” Parkinson said.

“It’s bad history if a nation sweeps things under the carpet and forgets them. It’s also bad history if you create new myths of wickedness and sins of the past. We have to confront the facts and learn lessons from them,” he added.

It also comes as Arts Council England published new guidance on restitution and repatriation on Friday, advising museums to “(re)consider your relationship with objects in your collection, their history, origins and acquisition—and most importantly, the people for whom they y have a special meaning today” when responding to a restitution request.

The last guidance published in 2000 advised against returning the bronzes, warning that previously returned items had been stolen from museums and appeared on the black market.