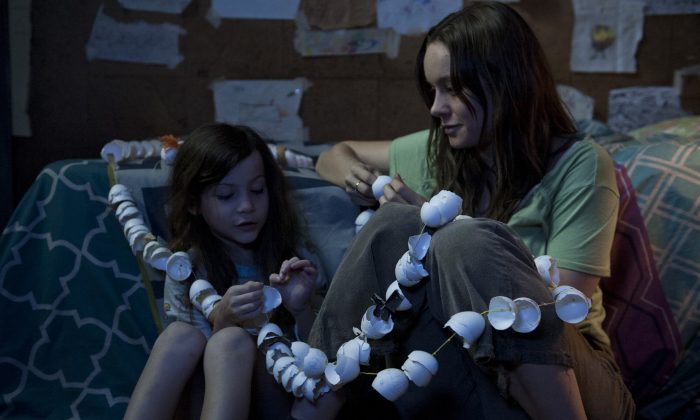 Not “the” room, or “a” room, just “room”, for that is how five-year-old Jack defines his world. In fact room is his world. He has only ever known its four walls, single cupboard, lamp, skylight into space, and electronic keypad next to a large metal door, one that opens once a day, like clockwork, to let the reason he’s imprisoned into his world, or room.

When Joy (Brie Larson – “Short Term 12”) was 17 years old, she was abducted by a man they refer to as “Old Nick”, and kept shut away from the world. Her only contact with him is to receive food supplies, and the nightly abuse which bought Jack (Jacob Tremblay) into room. Together they have survived, through routine, imagination, and submission, but with Jack reaching an age at which the constraints of his imagination are threatening to spread to the four corners of room, Joy decides that something has to change.

It’s hard to reveal too much about Lenny “Frank” Abrahamson’s adaptation of Emma Donoghue’s novel. Having it uncomfortably shoved in your face from the off is a cinematic enlightenment that works in tandem with that of Joy and Jack.

The lens is pushed far into our actors’ features, emphasising the claustrophobia of their situation, and pulls back over the course of the film to reveal something so much more beautiful than the morose exercise you might have expected.

Donaghue’s screenplay runs through the gamut of emotions: there’s the sorrow at their situation, with Jack having to sail a paper boat in the back of a toilet cistern; the frustration of failed escape attempts; and the unbearable tension of a ride in the back of a truck. “Room” is a film about living, and it’ll get to the very core of your being, stirring up every facet of what it means to be human.

Such a connection to a piece of fiction wouldn’t be possible without two very special performances. Brie Larson is simply incredible as the long suffering prisoner, physically and mentally deteriorating before our eyes, but maintaining a level of control for the sake of her boy. Much of what she achieves is through look alone, with so much focus on her big dark eyes. The sequence in which she stifles her tears in the middle of the night will break even the hardest of hearts.

Complementing her in this refreshing depiction of a mother/son relationship is young Jacob Tremblay, whose performance is at times beyond the praise of well-worn critical adjectives. We see the world through his eyes, using a voiceover that often alleviates the weight of his situation, depicting an imagination that has been stimulated by necessity and his mother’s love. Tremblay is revelatory, employing a speech pattern to hint at his underdeveloped language skills, something actors five times his age couldn’t handle.

Room is never sentimental; when one character tells another that they love them, you believe it, you feel the weight of it.

It’d be strange to recommend going into a dark room for two hours to watch a film about someone being trapped in one for seven years, but by the time you emerge, hopefully you’ll view the world in a slightly different way. Room is that good.