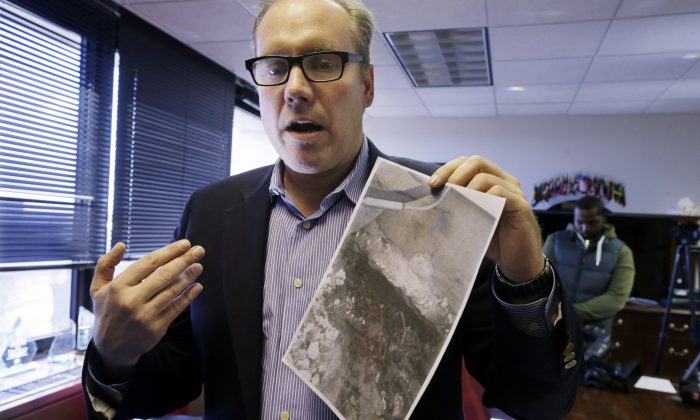 Toms River, N.J., resident Douglas Quinn in Newark, N.J., on Nov. 14, 2014, showing a photo of damage to his home after Superstorm Sandy. He says that his insurance company now says that the damage was pre-existing and refuses his claim. (AP Photo/Mel Evans)
New York

NEW YORK—When Superstorm Sandy left Denise Erickson’s home with a collapsed foundation, a loan from the Small Business Administration looked like the best deal in town.

She got more than $150,000 from the SBA to help fix her family’s Bellmore home, but the loan has left her with a $651 monthly payment and a serious case of buyer’s remorse.

“It was either stop construction or take the loan and get home,” said Erikson, whose family lived in a hotel and a rental while displaced.

Some of the thousands of Sandy victims who jumped at SBA’s offer in the storm’s immediate aftermath say they didn’t fully understand the potential repercussions of their loans. Now they regret taking them, saying they ruined their chances for recovery grants and left them with monthly loan payments their neighbors don’t have.

“It’s a complicated process and not terribly user-friendly,” said James W. Fossett, a senior fellow at Rockefeller Institute of Government and a professor at Rockefeller College of Public Affairs and Policy at University of Albany. “It wouldn’t surprise me at all if people are frustrated and the rules are sometimes conflicted.”

Immediately after a disaster, the Federal Emergency Management Agency offers help on the ground. FEMA also manages the National Flood Insurance Program so homeowners in flood-prone areas can be prepared to rebuild before disaster strikes. And SBA loans can quickly get help to affected homeowners.

But relief money doled out as grants must be approved by Congress, which took months to do so after Sandy—unlike after Hurricane Katrina, when supplemental federal funding was approved within 10 days. Federal rules count loans as aid when applicants seek grants.

Erickson, who has two children and manages duty-free shops at Kennedy International and LaGuardia airports, applied to the New York Rising program for a grant once it got up and running with money from the U.S. Department of Housing and Urban Development, knowing she might get a smaller grant because of the loan. But she was surprised when she was told the loan was the only aid she was entitled to.

“There was never the understanding that we would be pushed out of the (grant) program,” said Erikson, who has tapped in retirement savings to help pay for losses uncovered by the loan and a flood insurance payout of more than $250,000.

Staten Island Taxpayers’ Association president Dee Vandenburg, who has been helping residents with rebuilding, is among those critical of how grants are being handled.

“It’s almost like anybody who took an SBA loan is being penalized,” she said.
Erickson and the more than 32,000 other homeowners who took out $1.9 billion in SBA loans got aid right away—”If I didn’t take the loan I would have lost the house,” she said—but now can’t get as much in grants, if they get any at all.

But federal officials say the programs have worked as they should. HUD funds, known as Community Development Block Grant disaster recovery allocations, can be the only lifeline for some disaster victims.

Those who have the “financial wherewithal” to take loans free up later relief money for those who need it, HUD Regional Administrator Holly M. Leicht said.

“That is a good thing from a public policy perspective if it means our money goes to serve more low- or moderate-income folks who probably couldn’t afford a loan,” she said.

Loan applicants were told the money could impact other funding availability, SBA spokeswoman Carol Chastang said. But advocates say people were forcefully encouraged to get loans without understanding the potential fallout.

“They felt pressure or they felt it was just a necessary part of the process,” said Thomas Maligno, executive director of William Randolph Hearst Public Advocacy Center at Touro Law Center, which opened a law clinic for Sandy victims.

The loans can be costly even if people qualify. “Families very rarely can take on the extra money of an SBA loan,” he said.

It used to be worse for disaster loan recipients. In the past, grant applicants who also got loans had the full value of those loans counted toward their aid entitlement, even if they didn’t take the entire amount.

In 2013, HUD allowed states or municipalities distributing the funds to provide hardship assistance to people who also had SBA loans, in part because far more Sandy victims qualified for the loans compared to other disaster victims, HUD officials said.

In New York, for instance, a hardship waiver is available to SBA loan recipients if homeowner expenses—mortgage, utilities and the SBA loan payback amount—are equal to or more than 30 percent of total household income.

Build it Back and New York Rising have approved more than 1000 waivers.

Jordan Farkas, a day trader who also breeds and raises horses, took a $14,000 loan after his Long Beach house was flooded and flood insurance would not cover many of his losses. He said he didn’t want a loan but was told repeatedly to apply in order to be eligible for future federal aid.

Farkas paid off the loan eight months later, in part because the loan payback amount, with interest, would surpass $28,000. The $14,000 he got in a loan was deducted from his New York Rising award.

“Loans are not benefits,” said Farkas, who has a wife and two children. “For us, especially for us, we took it and paid it right back. There was no benefit.”