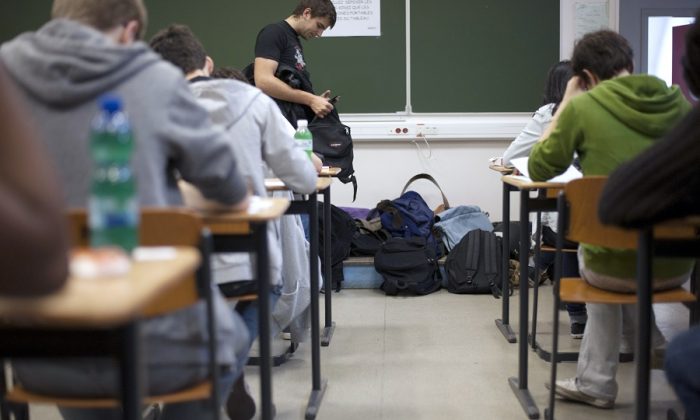 Update: Mom of Boy in Viral Photos Speaks out and Sets Record Straight

Scroll down for the photos
By Jack Phillips
biggersmaller
Print

A boy’s school photo has gone viral, apparently after his father ate the boy’s Pop-Tart, but that’s not the real story, according to the boy’s mother. The man claiming to be his father isn’t, and he’s trying to scam people out of money, she said.

She wrote: “So Kari’s school pics from last year has went viral. Nothing we can do about that part…it is what it is.”

So Kari's school pics from last year has went viral. Nothing we can do about that part…it is what it is. There are a…

She added: “There are a lot of posts/memes going around about him, and I must admit, some are hilarious. But it still doesn’t sit well with me that he’s being posted world wide. But like I said, it’s out there now and we can’t stop it. However, if you happen to see a post where someone is claiming him as there child, that is not funny…I don’t care if it is just a joke. Don’t be out here trying to use our son for likes or money. That’s lame and so disrespectful. Please, if yall continue to see people claiming him, claiming the pic as there’s, creating GoFundMe accounts and making money from my baby pics, please report it and let us know. Thanks!”

The photos are from 2017 and were shot at the boy’s daycare, his mother, Tantarnea Arnold, was quoted by First Coast News. “I understand that,” said Arnold of the post’s popularity. “That’s out of our control.”  The Facebook user isn’t the boy’s father, she said.

“It’s disrespectful,” she said. “We just really want to get rid of all our social media and we’re on social media to stay in touch with our family and to share special moments.. it really feels like a piece of you has been taken.”

The fake Facebook post had more than 116,000 shares as of Nov. 19 as well as numerous tens of thousands of comments and shares.

“Y’all pray for my son, nothing wrong with him but I ate his pop tart before his class picture and he said he never smiling again,” the Facebook user, EL Prive, wrote in the viral post. It quickly went viral.

“Can you relate and maybe give this fantastic parent some words if encouragement!! I am dying! I don’t know you EL Price but I think you rock!! And he is precious!” wrote one woman.

Added another: “Oh my goodness … send him to my house and I’ll get him as many pop tarts as he wants!!! What a cutie!”

“Cute even with the mean mugging!” one person wrote.

“He said what he meant, and he meant what he said,” said another person.

Added another: “He’s mad about his clothes.”

According to the American Psychological Association, preschoolers often get angry “because they cannot yet control their emotions; are not yet good at using words when they are frustrated and angry; are learning how to share; have a hard time understanding that other people have different ideas.”

They typically show “anger with tantrums and aggression.”

Meanwhile, kids between the ages of 6 and 8 may “be angry when they feel something is not fair; when they are rejected, punished, discriminated against or misunderstood,” the APA says.

And KidsHealth says that to soothe an angry younger child, have them take a “time out.” “Go into another room. Have them take a break from the situation that is making them angry. Let the emotions subside,” it says.

“Some children respond well to discipline classes. These include karate or other types of martial arts. Other children respond to classes that encourage relaxation such as yoga and meditation. They focus on breathing and stretching,” it says.