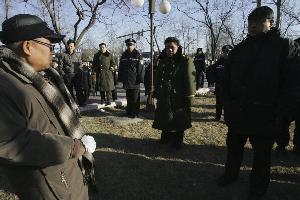 An old man with white flowers in his hands mourns for Zhao Ziyang, confronting the police (AFP/Getty Images)
China

The Funeral Arrangement Committee for Mr. Zhao Ziyang published an announcement on February 20 that the committee has decided to invite lawyers both in China and overseas to support Lin Mu’s lawsuit against Xi’an City Public Security Bureau. Lin Mu is the spokesman for the committee and secretary of the former General Secretary of the CCP Hu Yaobang. The lawsuit is now in the stage of collecting evidence through investigation and revising the indictment prior to the official prosecution.

The members of the group of lawyers for Lin Mu’s lawsuit include: Zhang Sizhi (Beijing), Gao Zhisheng (Beijing), Arthur Liu (California, United States), Jimmy Lee (New York, United States) and Louis Lvyi (Australia). Zhang Sizhi and Gao Zhisheng are famous lawyers in Beijing; they will fly to Xi’an city within a few days to submit the indictment on behalf of the plaintiff.

Because Lin Mu participated in the activities commemorating Zhao Ziyang, on January 17, 2005, his personal freedom was illegally restricted for 15 days by China’s Xi’an Public Security Bureau.

Hoping for the Court’s Fair and Open Trial

The Funeral Arrangement Committee for Mr. Zhao Ziyang hopes that after Xi’an City Intermediate People’s Court receives the indictment, it shall strictly abide by the law the time limit for placing a case on file for prosecution and the time limit for trial so that the case can have a prompt and fair open trial and adjudication. The Funeral Arrangement Committee expressed that they will closely watch and follow the entire process of this lawsuit. If Xi’an City Intermediate People’s Court does not place the case on file for prosecution within the legal time limit according to the law, the Funeral Arrangement Committee will consider publicizing the original indictment and appeal to the UN Commission on Human Rights and international human rights organizations.

The Funeral Arrangement Committee pointed out that during the period of the activities commemorating Zhao Ziyang, Chinese police persecuted members of the Committee and other citizens. A series of illegal acts have brutally violated the International Covenant on Civil and Political Rights, the Chinese constitution and law, and therefore shall be prosecuted according to the law.

Lin Mu’s Letter to Chief Justice of the Supreme Court

In the open letter, Lin Mu listed the frequent home searches, confiscation of property and interrogation by the public security bureaus in Xi’an city and Hangzhou city which occurred many times since 1995. He said, “On January 18, 2005, they abducted me, a 77-year-old man and illegally detained me for 14 days. My 72-year-old wife was also detained along with me. According to the record of criminal law in Han Shu (History of the Han Dynasty): The law in the Zhou Dynasty rules people more than 70 years or under 8 years old; they shall not be tortured or enslaved.”

Lin Mu said, “Old men like Ding Zilin, Jiang Yanyong and me did not commit any crimes. Mr. Zhao Ziyang is not only innocent, but also has merit to the people and the country. Why does the ruling regime want to go against the Chinese constitution, traditional morality, traditional law and mistreat and insult these innocent old men?”