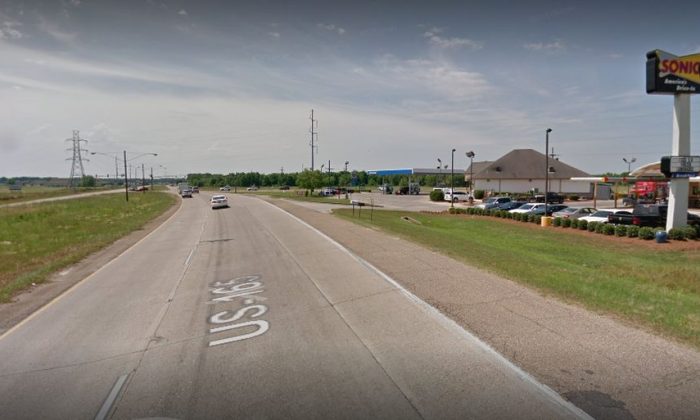 A pickup truck in Sterlington, Louisiana caught on fire after lightning struck it on Feb. 19. A photo shows near where the incident took place (Google Street View)
US News

A pickup truck in Sterlington, Louisiana caught on fire after lightning struck it on Feb. 19, according to local news reports.

The driver wasn’t hurt in the incident, but his truck was a total loss, WJBF reported.

Police Chief Barry Bonner told the News-Star that a truck traveling south on U.S. 165 was struck by lightning while it was in motion.

A nearby worker captured video footage of the truck burning.

The strike occurred near U.S. 165 and Louisiana Highway 2. It was close to several businesses, the report said.

Hope Herrington posted footage of the fire on Facebook, saying she is glad the driver was unscathed.

“All of a sudden lightning hit one of the poles at the red light and then there a van in front of it slammed on the brakes I guess it dodged it hit the truck,” said Herrington, MyArkLaMiss reported.

Herrington, who added that she was working her shift at Waffle House, saw the incident unfold.

“I seen the flames and I just took off I said I’ll be right back,” added Herrington on social media, according to the local news website.

Her co-worker, Valarie McDonald, called 911 after the strike.

Pickup hit by lightning while on US 165 in Sterlington LA

“It was in flame for a few minutes and then while I was on the phone I was like ‘it’s fixing to blow up’ and it did,” said McDonald.

“The flames, it started small, and then all of a sudden just black clouds and [it] went boom,” said Herrington.

According to officials, the lightning hit a stop light before jumping 300 feet, hitting the man’s truck.

Photos posted to local websites showed that the truck was totally destroyed in the fire.

“That’s my first time seeing that like up close it kind of scared me,” said Herrington.

The driver of the truck was not identified. Police in Sterlington said he made it to work afterward.

It’s quite rare for lightning to strike a moving vehicle, but when it happens, rubber tires aren’t enough.

It is a myth that tires can provide protection from lightning due to tires, according to the Weather Channel.

“In actuality,” the channel writes on its website, “lightning flows around the outside of a car, and the majority of the current flows from the car’s metal cage into the ground below.”

“In essence, a car acts like a mobile Faraday cage,” it said, referring to the grounded metal screen surrounding a piece of equipment.

The National Lightning Safety Institute says the results may vary after lightning hits a car.

“Reported incidents and related injuries make it clear that a person inside a fully enclosed metal vehicle must not be touching metallic objects referenced to the outside of the car,” it says. “Door and window handles, radio dials, CB microphones, gearshifts, steering wheels, and other inside-to-outside metal objects should be left alone during close-in lightning events.”

Meanwhile, it recommends, drivers should pull over to the side of the road, turn off the engine, turn on the emergency lights, place “one’s hands in one’s lap,” and wait for the storm to pass. Don’t touch any metal objects inside the car, the organization says.

Sometimes, lightning strikes can do indirect damage to vehicles, namely to its electronic systems.

“In many cases you will not find physical damage,” the website says, adding that it could pose a problem for people trying to access their insurance.