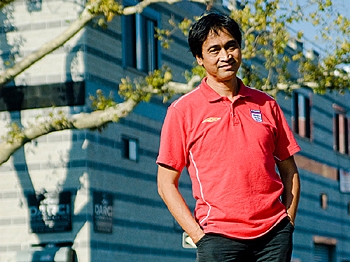 ROCK STAR: Emanuel Fuentebella standing on the LIC Rock that was made into a park through his efforts. Behind him is also a tree that he saved from destruction. (Joshua Philipp/The Epoch Times)
US

The Tale of a Man and His Rock

Joshua Philipp
Joshua Philipp is an award-winning investigative reporter with The Epoch Times and host of EpochTV's "Crossroads" program. He is a recognized expert on unrestricted warfare, asymmetrical hybrid warfare, subversion, and historical perspectives on today’s issues. His 10-plus years of research and investigations on the Chinese Communist Party, subversion, and related topics give him unique insight into the global threat and political landscape.
View profile
Follow
biggersmaller
Print
NEW YORK—On 12th Street in Queens, a five-foot-tall boulder sits in the middle of the road. Left to be by the Department of Transportation (DOT), it stands undisturbed amidst asphalt and traffic signs.

The rock, dubbed 12 Street Plaza, rests between 43rd Ave and 44th Ave., and has won its way onto the map of New York; marked proudly by a small green patch as a designated park.

Although a mystery to many who live outside of Long Island County (LIC), 12 Street Plaza has become a favorite to locals, who know it better as the LIC Rock. Those who live nearby also know of the man who stood up to protect it.

Emanuel Fuentebella, a small Filipino man known for his sense of humor and entertaining accent, is one of LIC’s most popular activists. A film crew hand by day, he has dedicated himself to defending the rock from the terrors of graffiti, developers, and litterers.

Standing on the rock, Fuentebella explained why he has taken this responsibility on himself.

Often, when people stumble across the rock, a puzzling look comes across their faces. Some scratch their heads and look at it. Others jump on it as if asking themselves whether this boulder erupting from the road is real.

“I have seen people go on top of this rock, and when they just sit, they’re in awe,” said Fuentebella.

Fuentebella feels that people’s interest comes from the rock’s isolation. He said that when people find it, they are often captivated by it. “At first it is always surprise and awe. A childishness in them comes out; an innocence comes out,” said Fuentebella.

“We hardly see anything natural in the city,” said Fuentebella. “It’s not that people are really attracted to it. I think its isolation is its beauty.”

Perhaps the most interesting of the visitors to the rock, was a Jewish man, recalled Fuentebella. “He was pointing to a small rock, and he said, ‘This is the best example and the biggest rock I have seen here to still show that natural wonders exist still, in this day of cement and gravel.’”

Fuentebella told him that he should see the rock by him. “He came that same afternoon.”

When the Jewish man saw the rock, “he actually, literally, cried,” Fuentebella said. “He was in tears. He just couldn’t believe it. That this was in the middle of the road and left alone, and that the DOT didn’t even try to blast it off.”

“He said that maybe this is the holy rock of Sakhrah in the Western hemisphere,” said Fuentebella with a smile. “I said ‘I don’t know, maybe.’”

Despite its possible sacredness, the rock’s safety wasn’t always as secure as it is now. Fuentebella explained that when he had moved to LIC ten years ago, he came to realize that his work was needed in protecting the rock. His work began when he caught a man pouring oil on the roots of a large tree across the street from the rock.

Standing on the rock, Fuentebella pointed to a new building behind him. “It was an old piece of a wooden shed before,” he said. “When they were constructing this, I saw them pouring oil on the side [of that tree].”

Fuentebella rushed to stop the man and called the police. The police wrote the man up and the tree was spared. But Fuentebella was suddenly struck with a realization.

“So I thought that, well, if they can try to kill this tree, they can pave over this [rock],” he said. “So I started a little campaign to get the powers that be aware that this exists and hopefully save it from a developer’s wrecking ball.”

Towards the end of 2005, Fuentebella set out, determined to ensure the safety of the rock. His first step was researching how to make it into a designated park, and through the help of New York’s Partnerships for Parks, he was able to accomplish just that. “Fortunately for me, they were having their first Partnerships for Parks workshop,” said Fuentebella.

He began printing tee shirts and patches to alert the community. Soon, news of the rock had reached many officials throughout New York. Fuentebella said that at one point, Queens Assemblywoman Catherine Nolan had even come to meet with him in person.  “One morning I heard my doorbell, and she goes, ‘Hi, I’m Cathy. I just wanted to make sure the rock really exists,’” he said, laughing.

It wasn’t long after that the LIC Rock was deemed a park.

There were even plans of taking out the cement around it and putting in grass and plants, but, according to Fuentebella, he had chosen to not take that route in fear that it would lessen the mystery surrounding it.

“Somehow I just feel confident that this will stay here,” he said.

Despite his feeling that it is now safe, Fuentebella’s quest to protect the rock still isn’t over, as the dangers of people littering and vandalizing it are still a reality.

Last summer, someone had tried dumping cement on it, yet out of a stroke of luck, it was washed clean by a sudden rain. “Fortunately it rained. It was still wet when it rained hard,” said Fuentebella, pointing to a small pile of cement that still rests on the ground beside it.

“I just hope that this [rock] will be here forever and I think it will be,” said Fuentebella. “Not because of me, no I don’t think so… just because… it is a rock.”