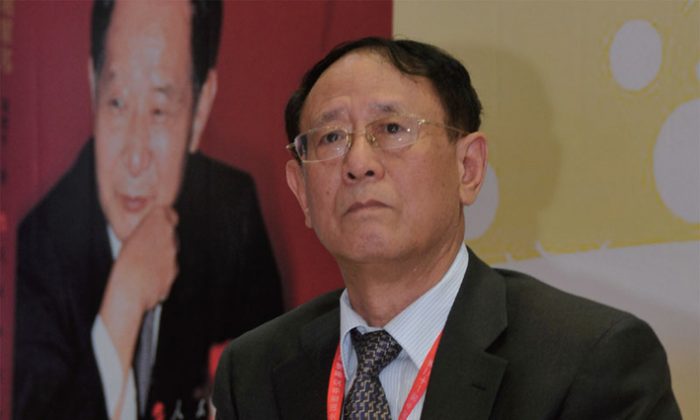 Hu Deping in August 2013. On Oct. 25, Hu was named the new president of the liberal monthly magazine China Through the Ages. (Epoch Times)
China

Just when one part of the Chinese state was about to force its will on a liberal magazine, a new person who has friends in high places was named to be its president.

Hu Deping, a reformist and the son of former state leader Hu Yaobang, has been named the new president of the privately funded monthly China Through the Ages, replacing the 91-year-old Du Daozheng, who became president emeritus, reported Radio Free Asia on Oct. 25.

Known by its Chinese name as Yanhuang Chunqiu, the magazine has been perceived by some Chinese officials as a pain in the neck for its reform-minded rhetoric, calling for the protection of human rights, and freedom of speech and the press.

In September 2014, then-president Du Daozheng spoke of his concern that the independence of the magazine would be in jeopardy after news broke that the Ministry of Culture would take charge of the publication.

“Du is already 91 years old. When we think of someone who could deal with those in the top Chinese authority, the only person is Hu Deping,” said Yang Jisheng, deputy president of the magazine who spoke in an interview with Radio Free Asia, when asked about the change in personnel.

“Two months. It should be the end of November,” said Yang in commenting about the imminent takeover of the magazine by the Ministry of Culture.

Xi’s father, Xi Zhongxun, once wrote an inscription for the magazine, praising it as a “good media,” reported Radio Free Asia in January 2011.

The Ministry of Culture falls under the State Administration of Press, Publication, Radio, Film, and Television (SAPPRFT), which is the official apparatus for the Chinese regime to censor and control media. SAPPRFT is under the control of Liu Yunshan, a member of the Politburo Standing Committee and a close ally of former Party head Jiang Zemin, who is locked in a power struggle with Xi Jinping.

Xi is said to be displeased with the way Liu Yunshan handled the Southern Weekend spat http://t.co/ZVOFbUGz

“I believe and hope that Hu Deping and Lu De will do as well as Du Daozheng, perhaps doing better than what Du has done. I believe this is also the wish of Du,” said Bao Tong, the former secretary to Chinese Premier Zhao Ziyang, when asked by a reporter of Radio Free Asia to comment on the change of head of the magazine.

Lu De, the son of former Deputy Vice Premier Lu Dingyi, will take over as managing deputy president and legal representative of the magazine.