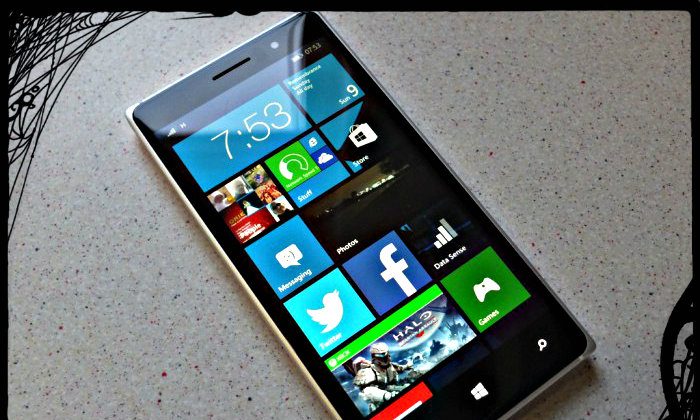 The range of Lumia phones is rather expansive, there are a whole range of phones spanning from the lowly Lumia 520 through to the enourmous and powerful Lumia 1520. The 8xx series Lumia have always felt odd to me, the 820 was overshadowed by the cameras in the 920 and 925 and underpriced by the 620 and 720.

The 8xx series phones are meant to be the Lumia mid range offering decent specs, decent build quality and all for not a lot of money. I’ve had the Lumia 830 for a few weeks now and it’s prime time to bring you my review, starting of course with the good and bad points.

The Nokia Lumia 830 is a great looking piece of kit, reminiscent of the more powerful, more expensive and thicker Lumia 930. In actual fact the 830 being thinner actually looks the nicer of the two.

Two things dominate the design of the Lumia 830, firstly the metal frame around the edges of the phone and secondly the rather familiar looking camera surround on the back.

The edges of the 830 are typical Lumia fare really, with the camera, power and volume rocker all on the right hand side, as you’d expect the camera button wakes the device straight into the camera if you want quick shots.

Also rather interestingly they’ve put the Micro USB port and the headphone socket on the top edge of the phone, both of which have some sort of plastic insert in them which seems to protect the metal frame.

The front of the phone is pretty much standard Windows Phone layout with capacitive buttons beneath the screen, as opposed to the onscreen controls, you also get the earpiece, front facing camera and sensors at the top of the screen. The screen also bares the Nokia branding which is probably one of the last devices to come with it on.

The display is slightly curved like you find on the high end Lumia, which really gives it a nice feel to use, the metal frame joins the edge of the screen with barely any gap or dust channels.

The back of the phone is removable, granting access to the removable battery, the Micro SD card and also the Nano SIM slot. The speaker also sits under the backplate and escapes through a grille in the back, the speaker isn’t the full width of the grille though so don’t get excited about the size of it.

The back also has a secondary microphone and the camera and flash. I’m not sure how necessary the large camera surround is, maybe it’s for looks reminiscent of the Lumia 1020, maybe it’s not. The backplate also has the Qi wireless charging insert attached to it.

The back of the phone is curved, it curves down to the metal frame again with no gap, this curved back makes the Lumia 830 really nice to hold in the hand.

Overall I feel that the Lumia 830 is a great looking phone, that is a pleasure to hold, to use or even to look at and as I said earlier I think the overall design and feel is nicer than the 930 thanks to it being thinner and lighter.

Spec wise the Lumia 830 sits very firmly in the mid range of the current Nokia portfolio. Here are the specs.

Out of the box the Lumia 830 comes with about 11Gb of internal memory free. The nice thing about Windows Phone and the way it handles memory cards, slot in a 64GB or 128GB memory card and you can set the phone to install all apps to the SD card along with all media files, so buying a Windows Phone device with a Micro SD slot is a damn good idea.

The SnapDragon 400 processor at first worried me, it’s a pretty basic chip that powers some much cheaper Android phones, but after a few hours I realised as always Windows Phone does not need stellar specs to perform well, every single app transition was fluid, I barely ever saw the “resuming” screen and it even ran games like Halo: Spartan Assault.

Here are the benchmarks for it and a few of its stable mates.

I have said a lot about Windows Phone over the years. Sometimes I’m really positive about the platform and sometimes I’m not. For me it tends to vary with whichever device I’m using at that moment in time. The latest version of Windows Phone 8.1 is really quite good, it’s pretty quick, the apps I need on a daily basis are 99% available, Microsoft are definitely on the right track.

The Nokia Lumia 830 runs the latest and greatest software. It’s running Windows Phone 8.1 with the Nokia Denim update on the top. The only slight thing missing is the fancy Nokia Camera app that they demonstrated at the launch of the 830, the one with HDR mode, quick capture and fancy after capture refocusing.

Despite that the Lumia 830 does a damn good job of keeping you productive and it can still take some rather nice photos. The strange thing about the Denim update is that barely any other devices will be getting it until next year.

Since Windows Phone 8.1 arrived in the scene Windows Phone users have been treated with a notification drop down, quick toggles, a voice assistant called Cortana, six columns of tiles, a new super small tile, the ability to add tiles for data or battery info, transparent tiles and quite a few other new features that really improve the whole experience.

Personally having been busy reviewing Android phones it has been a pleasant return to Windows Phone for me. A few key software elements really make the experience pleasant. Firstly the transparent tiles, the six columns and the new small tiles really make it possible to create a unique layout of your apps and tiles.

The notification area is the next thing that’s a pleasure to use, sometimes an app will get a notification and if you previously didn’t have it pinned to the start page you wouldn’t see it. Now the notification appears in the drop down list . Not entirely brand new or revolutionary, but it’s a welcome addition to Windows Phone.

I have written a lot about why I love Windows Phone over the years, for me the one article that sums it is here, entitled “I think I’ve fallen for Windows Phone”. Rather than reiterate all the points here I suggest you have a read of that if you’re wondering about the platform.

The Lumia 830 has two cameras, a 10 MP rear camera and a 0.9 MP front facing camera. I wasn’t expecting much from either to tell you the truth, often manufacturers put all their effort into their flagships like the Lumia 930 and 1520 both of which have 20 MP optics which take huge pictures and squish them down to make high quality lower resolution images.

The Lumia 830 is branded “PureView” which only really means that Nokia want you to think of it as a decent camera, there isn’t much fancy stuff going on in the background. Although saying that the 10 MP lense with 6-lens optics, OIS, a 1/3.4 inch sensor, a f/2.2 aperture really combine well to take some decent photos. It copes with a variety of lighting conditions and it quickly starts up and quickly captures the shot.

The camera app is the same as the one on most of the other Lumia with the manual controls for everything, although I found I didn’t really have to tinker much with it.

In low light the Lumia 830 does produce some noise and it also took a few attempts to actually focus on something in the dark. All standard stuff really, if this was any of the higher spec’d Lumia I’d be concerned, here it was just as I’d expected. In decent light though it took some nice shots. You can download the whole lot here, which includes the original size images.

The Lumia 830 has a removable 2200 mAh battery, which on paper didn’t sound great. I gingerly prepared the Lumia 830 for a gruelling few days, yes, I was going to sync my Coolsmartphone email address to it, which basically means it would be subjected a lot of spam, heated team discussions about the latest news and also many emails to manufacturers arranging reviews etc.

I was pleasantly surprised when I left work at five pm and still had a large chunk of my battery spare, in fact I got about 36 hours out of it, with a few hours screen on time.

The Nokia Lumia 830 is quite a capable multimedia  device, add in a memory card and you’re sorted. Music sounds good with some decent headphones and you get a graphic equaliser to play around with. The speaker on the back however was that great, it was just a standard phone speaker really, not that loud and without any real depth. Just stick with headphones or a fancy Bluetooth speaker.

Overall I would say that the Nokia Lumia 830 is possibly their best phone that’s available at the moment. It is just the combination of the best bits from all of their other phones, it is hard to explain, I liked the Lumia 1520 because of its high spec and Micro SD slot, I loved the Lumia 930 because of it’s really cool design and build quality and I also have a bit of thing for arranging little square tiles around.

These factors all combine to make the Lumia 830 something that is for me the ideal combination. I don’t need the best camera or the highest spec, I just want a phone that works well and it’s a pleasure to use and the Lumia 830 does that  hands down.

The design, the expandability, the  insane battery life, built in wireless charging and thin and lightweight chassis really make for a great device to use. I think I just need a more mundane colour for my daily device, black maybe.

As whether it is suitable for you I’d say if you want a really decent “all rounder” Windows Phone device then this could be the one for you, it is good at everything it does, not amazing, just good.