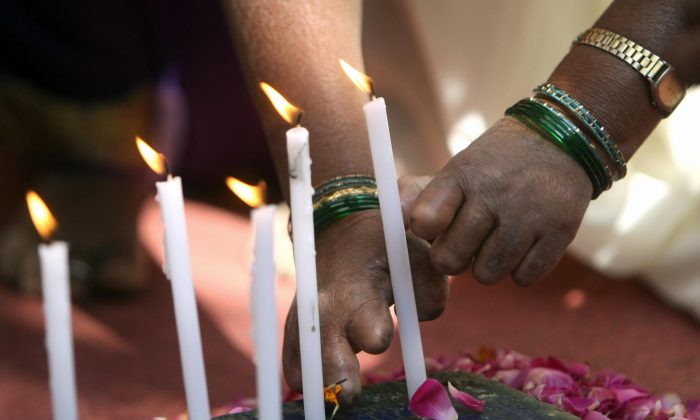 Indian leprosy patients light candles in remembrance of police officials who died in the Mumbai terror attacks, in Mumbai on Dec. 26, 2008. (Pal Pillai/AFP/Getty Images)
US

An elementary school in Southern California is on alert after two students reportedly contracted Hansen’s disease, also known as leprosy.

“The school district has received an unconfirmed report that two students at Indian Hills Elementary School have been diagnosed with Hansen’s disease (Leprosy),” the statement read. “This report has not been confirmed by the Health Department.”

Jurupa Unified School District Superintendent Elliott Duchon elaborated to ABC7 on the scare, saying that “we had reported to the office two students who were initially told by their doctor that they were diagnosed with leprosy, this is unconfirmed because leprosy requires a significant diagnosis including things like a biopsy.”

Leprosy is a long-term infection caused by bacteria Mycobacterium leprae and Mycobacterium lepromatosis. It primarily affects the skin, eyes, upper airway, and motor and sensory nerves. Transmission rate is relatively low, and the National Hansen’s (Leprosy) Disease Program estimates that around 95 percent of people have immunity to the bacteria.

The disease has been around since ancient times, and accounts of the disease are accompanied by harmful stigmas. There are stories of leprosy patients being shunned as outcasts in ancient civilizations including India, China, and Egypt.

“We have to keep stressing it’s not confirmed,” Barbara Cole, director for disease control for the Riverside County Department of Public Health, told the Los Angeles Times. “We’re just at the beginning of the investigation.”

Duchon said the school’s nursing staff was notified by a parent. Cole said the children were not hospitalized.

“Someone with leprosy would have skin lesions usually, and they can have fever, fatigue, joint pain,” Cole told ABC7. “Transmission or spread to others is very unlikely. We don’t feel there’s a risk in the school setting.”

Cole, citing national health guidelines, said officials do not consider workplaces or schools the types of places where leprosy could be transmitted, according to the Los Angeles Times. “Even if the cases were confirmed … leprosy is not easily transmitted to others, and we don’t feel like there’s a risk in the school setting,” she said. “It’s not a highly contagious disease.”