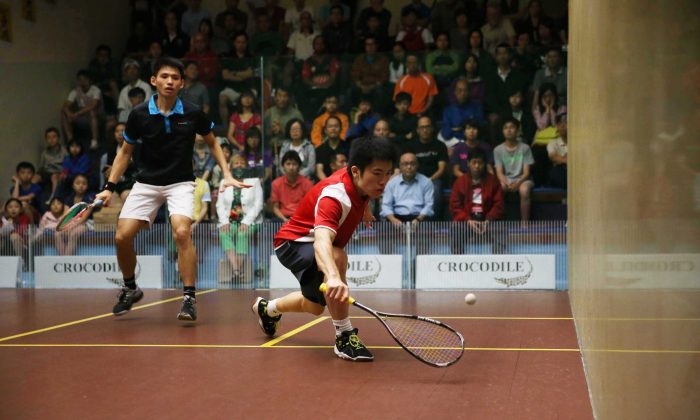 Leo Au preparing to play a front corner drop shot in the Final of the Crocodile Hong Kong Squash Championships against Max Lee on Saturday June 22. Au won this encounter to win the tournament for the second consecutive time. (Hong Kong Squash)
International

Another upset was Dick Lau losing in the second round to Wong Chi Him, but Lau was suffering from a recurring knee injury, which explains the easy wins by Wong in the second and third games.

Top seed Max Lee (1) cruised to the Semi-finals with straight game wins and, although he came up against more resistance in his Semi-final match against Yip Tsz Fung, won the encounter 12-10, 11-3, 11-4 to move into the Final.

Au’s opponent in the Semi-final, 19-year-old Tang Cheuk Yan, moved around the court well and produced a good range of shots to keep the match competitive and fairly evenly balanced in the first two games. But Au looked confident and relaxed and, with his international experience, moved Tang around the court and always had the capability to edge forward the points. Au won the first two games 11-7, 11-9 and although he was taken to eight points in the third, he had already done sufficient damage in the earlier games to take the third game 11-8.

Au and Lee have played many times and know each other’s games well. Au won two tight games (the first and third) and whilst Lee won the second game 11-3 it was Au that took the fourth game 11-3 to win the Final 3-1.

With a bye in the first round and although dropping a game to Tong Tsz Wing in the Semi-final, Joey Chan, the No.2 seed, had a straight-forward run to the Final.