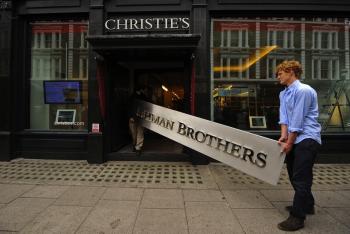 Employees carry a Lehman Brothers sign into Christie's auction house in London this week. The sign was sold as part of the 'Lehman Brothers: Artwork and Ephemera' sale in London on Thursday. (Ben Stansall/AFP/Getty Images)
Business & Markets

A sale at Christie’s in London was held several days after the second anniversary of the bankruptcy, the largest in U.S. corporate history, which also marked the subsequent global financial crisis in 2008.

Around 300 items were available for auction. Art dealers, collectors, bankers, and former Lehman employees all expressed an interest in bidding for artwork and remnants from the European branch of the former Wall Street legend. According to Christie’s, there were more than 1,100 clients and “fierce bidding” occurred. Christie’s also reported that the event set a European record for the number of registered online bidders, with more than 1,200 people signing up to own a piece of the Lehman heritage.

A bond trader who worked for another bank was there to bid—“for pure investment reasons”—for lot number 1001, a plaque commemorating the opening of the Lehman’s Canary Wharf offices by Gordon Brown in 2004. “Some of these pieces will be worth much, much more in 10 years’ time,” he said in an interview with the Financial Times.

Lot 1002 may have been a far more minimalist example of the sign-writer’s art, but the 2 ft x 10 ft Lehman Brothers corporate plaque still fetched 42,050 pounds (US$66,140) by an anonymous telephone bidder. This item fetched more than 14 times its estimated value.

The most expensive individual lot was Gabriel Orozco’s “Atomists: Jump Over,” a picture depicting footballers forming abstract images, which was sold for over 99,000 pounds (US$150,000). Its originally projected price was around 80,000 pounds (US$125,000).

A recent sale from Lehman’s U.S. headquarters resulted in over $12 million at Sotheby’s in New York on Sep. 25.

The auction in London managed to raise 1.6 million pounds (US$2.5 million), and this is still considered a drop in the ocean considering the bankrupt giant’s debt in excess of $600 billion.

PwC held a similar auction seven years ago in relation to the controversial collapse of the U.S. energy trading and power company Enron Corp. Interested bidders came from 43 countries.

Barry Gilbertson, a PwC partner, said that “We think that there are many people around the world who would like to acquire some art with a Lehman connection, and we have therefore timed the sale to ensure that potential buyers can view and bid efficiently online.”

“The administrators were confident that, by holding their nerve for two years and waiting for the art markets to recover, they would be able to realize the optimum return for the creditors.”