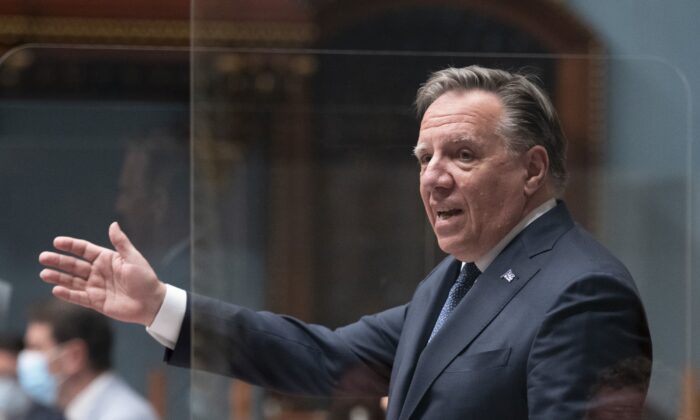 Quebec Premier François Legault rises during question period at the legislature in Quebec City on May 25, 2021. Quebec will not pursue the development of the fossil fuel industry, Legault announced on Oct. 19, 2021. (THE CANADIAN PRESS/Jacques Boissinot)
Canada

Legault Turns His Back on Fossil Fuel Development in Quebec

Quebec Premier François Legault recently declared that the province is completely done with fossil fuel extraction and is now being pressured not to compensate the impacted companies.

During his speech to open the new legislative session on Oct. 19, Legault said that going forward, Quebec needs to “count on its assets to profoundly transform our economy” by relying on electricity and renewable energy and ending fossil fuel extraction.

He said this would create wealth for future generations and attract investors who want to produce without generating greenhouse gases.

The move went virtually unopposed in the assembly. Dominique Anglade, Quebec Liberal Party leader and head of the official opposition, reacted by saying on Twitter, “This is exactly the path we suggested taking a month ago.”

Far-left party Québec Solidaire and the once-ruling pro-independence Parti Québécois were also on board, but went a step further by requesting that expropriated companies not be compensated.

The only party to push back on Legault’s decision was the Conservative Party of Quebec (PCQ), represented by just one MNA.

“Refusing to exploit our gas and oil resources is irresponsible,” said PCQ leader Éric Duhaime, adding that exploiting reserves “beneath our feet” would be better for the environment and the economy.

In a statement, the PCQ highlighted extracts from Legault’s 2013 biography before he became premier, in which he advocates exploiting Quebec’s oil.

“Norway, a very prosperous and socially advanced [oil-]producing country, is showing us the way,” Legault wrote. “I’m thinking about the extraordinary potential for fossil fuels underneath the [St. Lawrence] Gulf. Quebecers have the duty to explore and extract these fossil fuels to help reduce their dependence on foreign oil and to guarantee their future well-being.”

Outside the political sphere, environmental groups were ecstatic and sought to build on their victory, while industry players and critics were dismayed by the move in the midst of an energy crunch.

“This is excellent news,” said Patrick Bonin, climate and energy campaigner at Greenpeace Canada. “Closing the door on fossil fuel extraction is a huge victory, made possible by relentless opposition from citizens to both shale gas and conventional oil and gas exploitation.”

Bonin also said the government should not compensate oil and gas companies that will be expropriated, claiming they are “largely responsible for the current climate crisis.”

Many other green NGOs made the same plea. Quebec needs to “turn its back on fossil fuels without compensating” the oil and gas industry, said Émile Boisseau-Bouvier, climate policy analyst with Équiterre.

Mario Lévesque, president and CEO of Utica Resources Inc., has been active in recent days defending his interests and those of his industry, pleading in an open letter to Legault to reconsider killing oil and gas development at a time when the world is undergoing an energy crisis.

Lévesque told The Epoch Times that based on a report by the Geological Survey of Canada, “the scale of the Utica shale gas [field] would have been able to supply 100 percent of the Quebec market for over 100 years.”

He says the value of that natural gas would be at least in the hundreds of billions of dollars. He said an evaluation is underway by an independent firm to determine what the losses will amount to. As for jobs, “several studies show that over 10,000 jobs could have been created by developing the Utica shale basin,” he says.

With Legault’s declaration, Lévesque is now working to be properly compensated if expropriated.

“We’re urging the government to respect its own legislation on expropriation,” he said, adding that doing otherwise would damage the province’s reputation with local and foreign investors.

Legault’s decision mainly impacts exploration and future projects, as Quebec was not producing oil or gas.

Énergir, Québec’s largest natural gas distributor, told The Epoch Times that “neither itself, its employees, nor clients would be affected by Quebec’s decision,” since the gas of fossil origin it distributes is entirely sourced from Western Canada and the United States.

The Montreal Economic Institute (MEI), a free-economy think tank, criticized Legault’s move and noted the impact it would have on the province.

“It’s very obvious this decision was made to curry favour with the environmental militant groups rather than consider the economic interest of Quebecers. While we close the door to exploiting our own resources, we’ll continue to import 300,000 barrels of oil per day and send $5 billion a year to Alberta and the U.S. for importations,” MEI director of operations Miguel Ouellette said in a statement.

“We have to stop playing the political card and think about Quebec families.”

The MEI said Quebec’s gas potential could create 9,200 jobs per year over 25 years, as well as creating $93 billion in wealth and $15 billion in revenue for the government. The think tank also expressed concerns about how the expropriated companies would be compensated, citing Legault’s intention to buy back the issued permits.

“A permit buyback does not take into consideration the companies’ administrative costs to obtain the permits, nor the future revenues which would normally be considered in an expropriation,” MEI said in an email.

Former MP Dan McTeague, a gas price expert and president of Canadians for Affordable Energy, takes a similar line, calling the move to end oil and gas exploration in the province “another example of governments posturing without any deference to reality.”

“If Quebec’s political elite believe farmers, industry, and drivers can continue without fossil fuels, then an honest move would be to ban natural gas, propane, oil, diesel, gasoline, plastics, textiles, pharmaceuticals, cement, aluminum, and any other use of hydrocarbons,” McTeague told The Epoch Times.

“Quebecers supporting this virtue signalling on the eve of the COP26 climate bed-wetting conference are in denial of themselves and realities of their province both today and tomorrow.”

Legault and Prime Minister Justin Trudeau are both expected to attend the UN Climate Change Conference (COP26) in Glasgow, Scotland, which starts on Oct. 31.