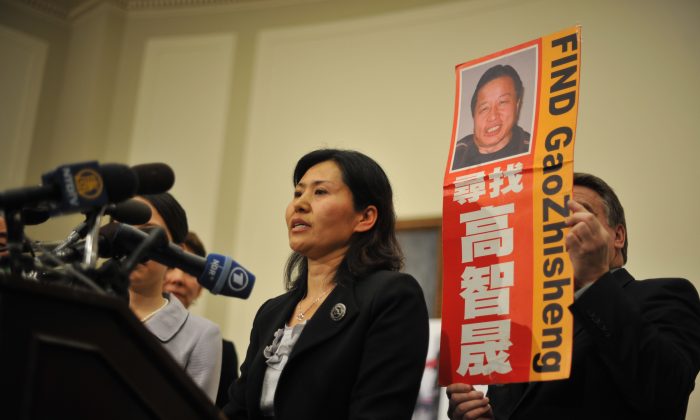 Geng He, the wife of Chinese rights lawyer Gao Zhisheng, participates in a press conference on Jan. 18, 2011, in Washington, DC. The American Board of Trial Advocates wrote a letter to U.S. President Obama on Monday, calling on him to help bring the Chinese rights lawyer Gao Zhisheng to the United States for medical treatment and uniting with his family. (Tim Sloan/AFP/Getty Images)
China

A U.S.-based association of lawyers and judges wrote to President Barack Obama recently, calling for the president to publicly speak out about, and attempt to secure help for, the beleaguered Chinese human rights lawyer Gao Zhisheng. Gao was released from years of detention last month but is in a state of poor health and continues to suffer official surveillance and harassment.

Mark Robinson, the president of the American Board of Trial Advocates (ABOTA), wrote the White House on Monday, representing the group’s 7,200 members.

He asked the president to personally take the matter up with Xi Jinping on their next meeting. The primary concern is for the Chinese authorities to permit Gao to come to the United States for medical treatment and to reunite with his wife and children, the letter says.

ABOTA is a national association of experienced trial lawyers and judges dedicated to the preservation and promotion of the civil jury trial right, according to its official website.

The 50-year-old Gao, a well known Chinese human rights lawyer, emerged from a three year prison sentence recently for “inciting subversion of state power,” a punishment he incurred for taking on legal cases that challenged the regime. This included medical malpractice and land confiscation cases, and the persecution of underground churches and practitioners of Falun Gong, a spiritual group targeted in China since 1999. Gao has won several international prizes for his support for human rights, and was nominated for the Nobel Peace Prize on two occasions.

Gao has suffered severe health problems since emerging from prison on Aug. 7 this year. According to his lawyer, Jared Genser, Gao is “utterly destroyed” from his prison time: he lost 50 pounds, suffers severely damaged teeth, and has trouble communicating.

Gao also needs mental health care, his wife says. Gao was locked in a tiny room without windows and was forbidden to communicate and read for the entire duration of his detention.

He is currently under what amounts to house arrest at his sister’s home in western China’s Xinjiang Province, in urgent need of medical care. Chinese authorities have not granted him permission to leave China.

Gao’s wife, Geng He, and their two children are now based in California, having gained political asylum after they escaped China in 2009.

“It’s state persecution of an individual. We’re powerless to do anything,” Geng said in a press conference in Washington, D.C. on Sept. 9. “I sincerely hope President Obama and Secretary of the State Kerry publicly express their concern for Gao Zhisheng, because this is the most straightforward way to support China’s human rights.”