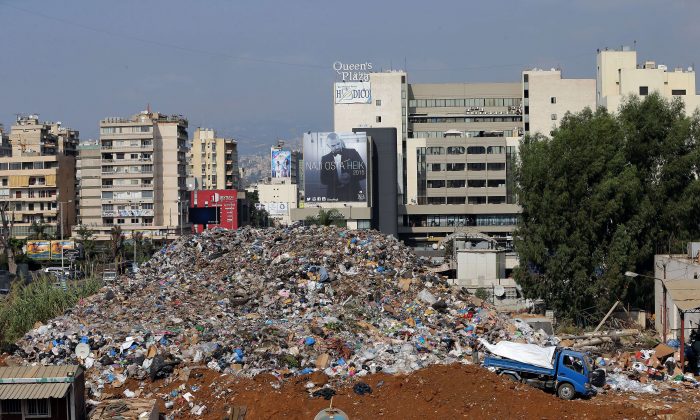 A view shows a temporary garbage dump on the site of the highway of Sadd al-Bawshriyeh at the northern entrance of the capital Beirut on Sept. 4, 2015. (Joseph Eid/AFP/Getty Images)
Opinion

A simmering revolution of sorts is in the offing in Lebanon. People have taken to the streets to protest against the government’s inability to find a solution to the mounting trash collection problem, even going so far as to occupy a government ministry.

The government remains incapable of defusing the tension, or of solving the garbage crisis, which began when a landfill site near Beirut over-spilled its capacity. The state’s knee-jerk reaction to the protesters’ demands has left one dead and scores injured—raising fears that we could soon see yet another popular movement upend an Arab country.

Lebanon is a deeply divided country headed by perpetually quarrelsome politicians. Once upon a time, a Dutch political scientist called Arend Lijphart chanced upon Lebanon’s crisis politics and offered a blueprint of sorts, a plan meant to alleviate the misery of a people who couldn’t live together and couldn’t live without each other. He called this theory consociationalism.

This tongue-twisting governing framework is very simple. It sees a state as balanced on four pillars, just like a house on four columns. Replace or take out one column and the entire edifice will come crashing down. The idea behind this plan was that those who reside under the roof supported by these four pillars would be mindful of the vitality of this political engineering and would do their best to keep it intact.

This almost embarrassingly simple framework was applied in Lebanon under the name “confessionalism”. And it worked—sort of. By dividing power evenly among Lebanon’s three main religious communities (Sunni, Shia and Christian), the confessionalist system offered a long-suffering citizenry some brief respite from the burdens of Lebanon’s insidious history and the tyranny of its sectarian politics.

But the order of sorts that was established has been something of a rollercoaster, and now it’s coming off the tracks.

Thanks to its precarious physical location and its religiously divided society, Lebanon has been dragged down into the dirt time and again. This country has experienced it all: political assassinations, hostage crises, civil war, policy paralysis and partial military occupation by outside powers.

Now Lebanon is suffocating under another kind of dirt: actual dirt, heaps and heaps of it, strewn across this once beautiful country.

A friend in Lebanon tells me on the phone from Sidon that the country literally stinks. The rubbish heaps on the streets of Beirut are all too apt a metaphor for the fate of Lebanon’s unwieldy, unworkable multi-sectarian power-sharing government. The uncollected rubbish on the streets of Beirut bring us closer to the rotting, insidious and helpless nature of Lebanese politics.

Even as Lebanon deals with one of the worst refugee crises in the world, thanks to its proximity to Syria, it’s been stuck without a president for more than a year. Its sectarian political parties can agree on nothing—not even on the clearance of litter from the streets, let alone other vital issues of national importance. The rancorous government exists on borrowed time, with parliament twice extending its term without elections.

One of the partners in the power-sharing government, the Hezbollah-aligned Free Patriotic Movement, recently walked out of the country’s “trash-crisis talks”, alleging its co-partners of theatrics, corruption and double-dealing.

The truth is Lebanese politics is in a terminal mess. Its politicians seem to have abandoned the basic principles behind confessionalism, and with that the interest of the Lebanese people. The “rubbish revolution” that saw one person dead and scores of Lebanese out onto the street protesting against the sorry state of affairs in public service is unlikely to lead to any substantial change in the political culture.

Poring over the chaos in Lebanon, Reuters suggested that “the stench of uncollected refuse in the streets of Beirut is a stark reminder of the crisis of government afflicting Lebanon, where politicians divided by local and regional conflicts are unable to agree on where to dump the capital’s rubbish.”

Then there are the puppet masters pulling the strings from afar. With Shia Iran and Sunni Saudi Arabia vying for dominance elsewhere in the Middle East, the spillover of their rivalry in Lebanon is inevitable—and their meddling has helped make Lebanese politics both vile and unworkable.

The powerful Shia movement Hezbollah, which sparked a full-scale conflict with Israel in 2006, is backed by Iran. Then there’s the pro-Saudi camp within the government, backed by the West, which sees Hezbollah as a serious threat.

This unhealthy state of affairs contributes to the making of an institutionalized dysfunctional or shall we say, a “failed state”. As one observer put it, Lebanon’s state barely exists, it is hollowed out, weakened by narrow agendas, non-state actors, and a Lebanese propensity to side with whatever local or regional group serves the short term interest (or pays).

Things have always been like this in Lebanon. In the 19th century the Turkish Sultanate encouraged the secretive Druze Muslims to wage a civil war against the Maronite Christians. A military Christian government that existed in Lebanon from 1864 to 1914 persecuted the Muslims. From then on, for a better part of 20th century, there have been a litany of external meddlers—from the French to the PLO, Iran to Israel and Syria to the United States—all raising up one kind of stink or another.

These actors not only determined the way the Lebanese state functions but freely used its complex ethno-religious and physical terrain to further their own political and military adventurism. This latest crisis over uncollected solid filth is a simple reminder that Lebanon is firmly back on the agenda of dirty big power politics.

Amalendu Misra is a senior lecturer of politics, philosophy, and religion at the Lancaster University, U.K. This article was previously published on TheConversation.com