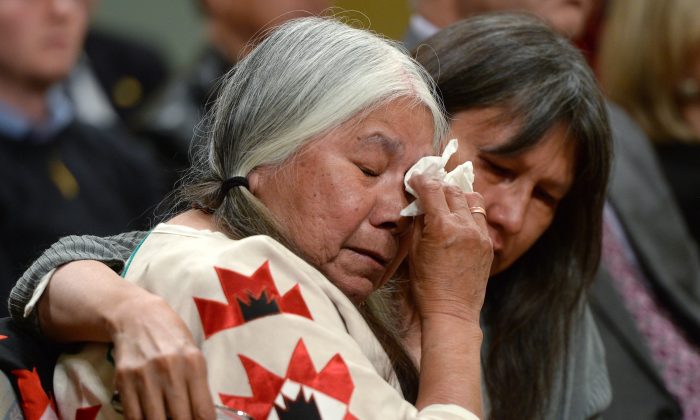 A woman is comforted in the audience during the closing ceremony of the Indian Residential Schools Truth and Reconciliation Commission, at Rideau Hall in Ottawa on Wednesday, June 3, 2015. (The Canadian Press/Sean Kilpatrick)
Canadian Content

What will the lasting legacy of the Truth and Reconciliation Commission be?

As Cree youngsters in the north, we are taught the tradition of how to walk on the land and in the bush—with each foot fall carefully and quietly placed so as not to disturb the food sources that have always meant the difference between thriving and starvation. It is a hard-won but essential skill for those living off the land and it takes many years of practice to master.

Sadly, like so many of our traditions, this one was almost swept away during the tragic Indian Residential Schools period described as Canada’s greatest shame by Justice Murray Sinclair, Chair of the Truth and Reconciliation Commission.

On June 2, after the Commission’s findings and final recommendations were released, the baton will be passed to people like Ry Moran, director of the National Research Centre at the University of Manitoba. Here, the many hours of deeply personal testimony will be housed and a plan struck to foster further research and to decide how best to pass on all that has been learned.

As he reflects on the many tears that were shed during the thousands of hours of disclosures, the horrors that still haunt many Canadians, and all that was lost, Moran said: “At its core, kids were denied the right to be children and to feel the love of their parents in their lives. At the same time, parents were denied the right to give love—an attack on the most fundamental and sacred elements of any society.”

When I think back on the role my own parents played in our lives and in Moose Lake, Manitoba, where they both began their careers as teachers, how very different things could have been.

Though they arrived separately to a reserve that was accessible only by boat, snowmobile, or dog team back then, they left together and their story is nothing short of remarkable in the way it paints what life in a Cree community used to be like.

Yes, they witnessed firsthand the chasm created by residential schools, but, as the community’s first Cree teacher, my Dad fell in love with another young teacher, the daughter of a Scottish couple who no doubt feared their girl was entering the unknown. Together, their time there was impactful and not only in romantic ways but in how they helped hold the community together.

I love to hear their stories about Moose Lake, back when teachers used to smoke at the front of their classrooms and Physical Education entailed cutting wood and hauling water.

They both spent most every evening visiting the families in the reserve. Mum says they had a calendar mapping out who they would have tea with on which night, so they could eventually spend time with all of the community.

Now and then I still run into people who used to be their students, and I am proud to say the relationships they built are still cherished.

My parents often talk about the people from the reserve who lived off the land. There was no such grandiose title as “Elder” back then, only people who held themselves with the confidence of spending years being solely responsible for their own and their family’s existence.

When young people began returning from residential schools, it was fascinating that what struck those who lived off the land the most was that these “students” had to be taught how to walk all over again. Not with the harsh heel strike they had learned in the towns and cities but with the gentle foot fall of their early childhoods.

Maybe that will be the lasting legacy of the Truth and Reconciliation Commission, that we can face the truth of our past, see a way forward that is hopeful, and learn how to walk gently together so that, as Justice Sinclair so eloquently said, “we can turn our greatest shame into our greatest source of pride” as peoples and as a nation.

James Wilson is an adviser with EvidenceNetwork.ca and commissioner of the Treaty Relations Commission of Manitoba, a neutral body mandated to encourage discussion, facilitate public understanding, and enhance mutual respect between all peoples in Manitoba. @JamesBWilson_