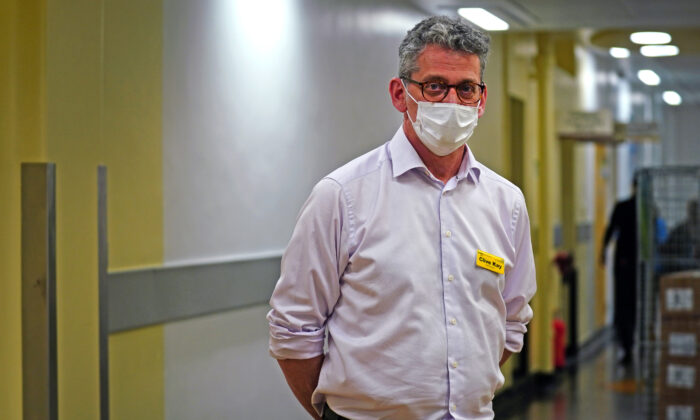 One of London’s largest and busiest hospitals could lose over 1,000 staff over the government’s CCP virus vaccine mandate for frontline health workers, the head of the hospital acknowledged on Sunday.

Dr. Clive Kay, chief executive of King’s College Hospital, confirmed that around 10 percent of the hospital’s 14,000 staff have not received the CCP (Chinese Communist Party) virus vaccines as the mandate deadline approaches.

From April 1, COVID-19 vaccination will become a condition of deployment in the health and social care sector, except for those clinically exempt and those participating in a clinical trial. To meet the requirement, staff will need to receive their first dose by Feb. 3 to allow an eight-week gap between the doses, according to guidance from NHS England.

The single-dose Johnson&Johnson vaccine has been approved by the UK’s medicines regulator but is not available in the UK.

King’s College Hospital on Friday said “nearly 90 percent” of its staff had been vaccinated after one of the hospital’s ICU doctors confronted Health Secretary Sajid Javid with his scepticism about the mandate.

Speaking to the BBC’s “Sunday Morning” show, Kay declined to comment on “individual cases” but said it was ultimately the choice of staff members whether or not they choose to comply.

“If, ultimately, at the end of the day an individual is fully informed and we feel we’ve done all our very best to encourage them to have a vaccination and they’ve decided not to, that is their choice,” he said.

The hospital chief said he and his colleagues have been encouraging staff to be vaccinated, but not forcing them to do so.

“We must treat them with kindness, with compassion. We must give them every single opportunity to talk through—if they’ve don’t want the vaccine, if they’d like to talk, if they need any help or clarification—but ultimately, it is their choice,” Kay said.

But he also acknowledged that unvaccinated staff will lose their jobs if the hospital “can’t find that opportunity to redeploy them.”

Speaking on the same show, Education Secretary Nadhim Zahawi defended the requirement for NHS staff to be vaccinated.

“I think when you work with the most vulnerable people—and those going into hospital are very vulnerable, as are those in our care homes—you have a duty of care,” the former vaccines minister said.

Steve James, a consultant anesthetist at King’s College Hospital, told Javid on Friday that he doesn’t believe the science for mandating the vaccines is “strong enough,” arguing the vaccines’ efficacy in preventing the transmission of new variants is limited and short-lived, and that natural immunity should be acknowledged.

An earlier version of this report misstated the deadline for health workers to get their first CCP virus vaccine dose. The Epoch Times regrets the error.