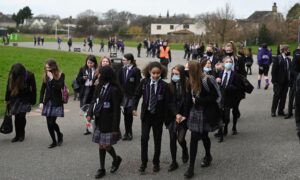 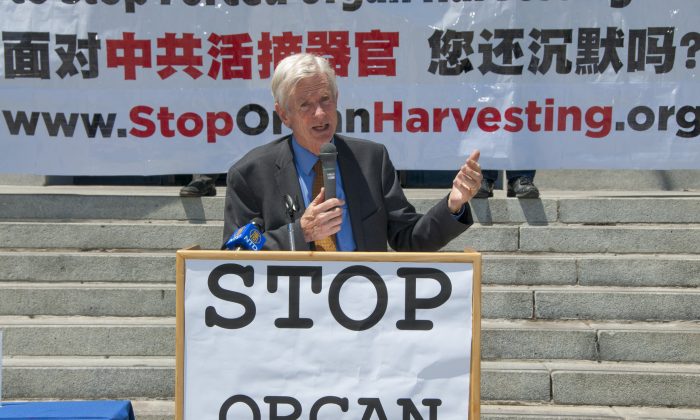 SAN FRANCISCO—In a press conference on May 23 in front of the San Francisco City Hall, David Kilgour addressed his work of the last 10 years in exposing China’s state-sanctioned killing of Chinese prisoners of conscience for their organs.

“You don’t have to be a real detective to find out what is going on. We’ve won the argument; the intellectual argument is over. Everybody knows it is happening,” he said.

Kilgour, a former Canadian member of Parliament, former Secretary of State for Asia-Pacific, and 2010 Nobel Peace Prize nominee, arrived in the San Francisco Bay Area on May 23 for a three-day visit.

He and international lawyer David Matas are the key human rights advocates who have investigated the forced organ harvesting from prisoners of conscience in China.

Their groundbreaking report, “Bloody Harvest,” released in July 2006, documented evidence that mass organ harvesting was taking place in China, and the victims were primarily adherents of the spiritual practice Falun Gong. In 2016, Kilgour and Matas, working with journalist Ethan Gutmann, published a new report, “Bloody Harvest/The Slaughter: an Update,” based on an examination of the transplant programs of hundreds of hospitals in China.

Since 2006, Kilgour and Matas have each traveled the world to raise awareness of the atrocities in China, testifying before the U.S. Congress and other national legislatures and parliaments, and speaking at academic seminars, human rights forums, and rallies.

Kilgour is attending and speaking at several film screenings during his visit, including a screening of the Peabody Award-winning documentary “Human Harvest” at Stanford University on May 23.

The documentary “Hard to Believe,” winner of 14 awards, by Emmy Award-winning producer Ken Stone, will be shown on May 25 in San Francisco at the University of California–San Francisco and the Opera Plaza Cinema.

The free screenings are sponsored by DAFOH, an organization with the mission to protect ethical medical practices that further human dignity.

Bay Area DAFOH representative Dr. Alejandro Centurion commented: “Mr. Kilgour’s visit will help more members of the medical community and the general public learn about these crimes. Many Americans, including health care professionals, have not yet heard about what is arguably one of the greatest violations of medical ethics of our time, and greater public awareness is essential to help bring this to an end.”

“Hard to Believe” will be screened on May 25 at 1:30 p.m. at UCSF’s Millberry Union Conference Center, 500 Parnassus Ave., and at 7 p.m. at Opera Plaza Cinema, 601 Van Ness Ave. Free admission. RSVP at h2b.eventbrite.com