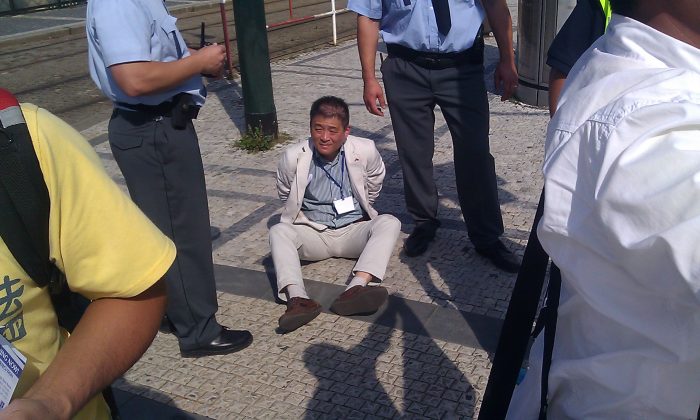 A staff member of the Chinese Embassy who attacked Falun Gong practitioners protesting outside the China Investment Forum has been handcuffed by Prague police, on Aug. 28, outside Prague Castle. (Sun Hao/Epoch Times)
China

On Aug. 28 Zhang Gaoli, the first vice premier of the People’s Republic of China and one of the 7 members of the elite Politburo Standing Committee, led a 500-person delegation of Chinese officials and businessmen to Prague for the China Investment Forum. The two-day meeting was called to further the mutual deepening of business and political relationships between the PRC and the Central and East Europe nations in attendance. Massive investment projects were to be discussed.

Zhang was greeted by human rights activists who wanted to expose his record persecuting the spiritual practice of Falun Gong in China.

While high-level Chinese officials involved in persecuting Falun Gong have often been sued when they travel outside of China, the Czech Falun Gong Association decided before Zhang’s visit not to take to the courts. Instead, they devoted their energies to publicity.

“We eventually decided not to go ahead with charges because we thought it would not bring a sufficient effect,” said Milan Kajinek from the Association. “We intend, however, to spread widely the documents exposing his activities.”

A notice announcing an investigation of Zhang Gaoli published on Aug. 25 by the World Organization to Investigate the Persecution of Falun Gong gives a brief summary of Zhang’s alleged crimes: “Zhang Gaoli carried out the persecution in Guangdong Province, Shenzhen, Shandong Province, and Tianjin, causing tens of thousands of Falun Gong practitioners in these areas to be illegally kidnapped, detained, and sentenced. Massive number [sic] of Falun Gong practitioners are tortured, resulting in injury, disability and death. Zhang is suspected of committing the Crime of Genocide, the Crime of Torture and Crimes against Humanity.”

The Czechs still have vivid memories of suffering under the totalitarian rule of the Communist Party, and the accusations against this Chinese Communist Party official found a receptive audience. Several major Czech media outlets picked up the information spread by the Falun Gong Association and reported on Zhang’s alleged crimes.

The association also sent emails to the participants in the Investment Forum, and the news quickly spread among them.

One of the businessmen wrote to the Falun Gong Association, “Thank you for the report. I left the event half an hour after it started after reading online what sort of riff-raff were attending.”

Another businessman present at the forum told the demonstrators outside the venue that the information about Zhang Gaoli completely changed the perception of those inside the meeting of this top official.

Roman Joch, the former adviser to the prime minister and the director of the Civic Institute, said in an email to the Epoch Times: “The vice-premier Zhang Gaoli is … the man who has blood on his hands, blood of hundreds if not thousands of innocent ones who committed no crime but peacefully professed their belief.”

“He has the expression of a grey bureaucrat-official who was ‘just carrying out orders’—just as Eichman did 70 years ago,” wrote Joch in his email.

On Aug. 28, the first day of the conference, individuals protesting the Chinese regime’s human rights record and a group of Chinese who had come to welcome the Chinese delegation, gathered outside the Prague Castle where the conference was to be held. Protesters held a number of banners, and the welcoming group was outfitted with over-sized PRC flags.

The welcoming group surrounded and pushed the Falun Gong protesters, according to Minghui.org, a website run by Falun Gong practitioners outside of China.

Prague police requested the group welcoming the officials stay on one side of the road, leaving space for Falun Gong practitioners on the other side, but a Chinese Embassy official who was wearing his official identification around his neck strongly resisted the police orders.

In order to avoid any conflict with the group from the embassy, the Falun Gong practitioners moved a block away.

As the Chinese delegation’s motorcade approached, the Chinese Embassy official and two of the welcoming group rushed into the Falun Gong protesters, snatched their banners, and violently assaulted them, ignoring the warnings from police officers. A photo from Minghui shows a Falun Gong banner torn into two pieces due to the attack.

“We don’t want to block business with China,” Veronika Sunova, head of the Czech Falun Gong Association, told local media. “We want to highlight, however, that investment in China can benefit the Chinese Communist Party. It is important to know that this money could be then used to persecute Falun Gong.”

Czech President Milos Zeman and the Premier Bohuslav Sobotka indicated earlier this year, that they want to strengthen business ties with China and thus will not mention human rights issues any more in their talks with their Chinese counterparts. This stance has been met with protests by ordinary people as well as by politicians from the opposition parties.

The former head of the Environment Ministry, Martin Bursik came on the morning of the Aug. 28 carrying a Tibetan flag to show support for the protesters.

“I feel an urgent need to express my displeasure with the form of the China Investment Forum. To say this is the climax of the relationship between Czech Republic and China is in my view scandalous,” said Bursik, pointing to the words of the Czech premier.

Several popular Czech artists have recently announced they will stage a concert on Oct. 6 called “Conscience Cannot Be Bought” in support of Falun Gong and the human rights advocate Gao Zhisheng.

One of the artists is the singer Marta Kubisova, a longtime friend of the late President Vaclav Havel and former spokeswoman of Charter 77, the Czech movement that opposed communist rule.