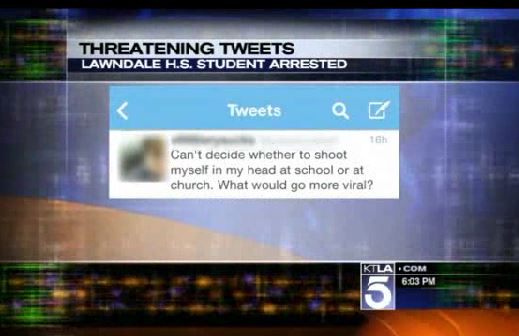 A female student at Lawndale High School was arrested on Thursday after she made threats on Twitter to shoot people at the school.

The threats come amid an increasing amount of lockdowns at schools across the United States because of guns, and two major incidents at schools this week that saw three people get shot by guns at schools.

The Lawndale High School student, who hasn’t been identified, tweeted:

“#thoughts during school should I shoot up the school? what if I accidently shoot someone I like? Pfftt I hate everyone what am I talking about.”

Capt. Mike Parker of the Sheriff’s Office told Fox that “Threats such as these are taken very seriously.”

“Criminal threats bring fear to students, faculty, parents, and the community,” he added. “The threat was specific enough and direct enough we were able to take immediate action and make the arrest. “

The girl is a juvenile but is facing a felony charge for making a criminal threat.

Police got a search warrant for the student’s home but didn’t find any lessons.

The student made two other related tweets–one that said the word dead over a dozen times, and another that contemplated: “Can’t decide whether to shoot myself in my head at school or at church. What would go more viral?”