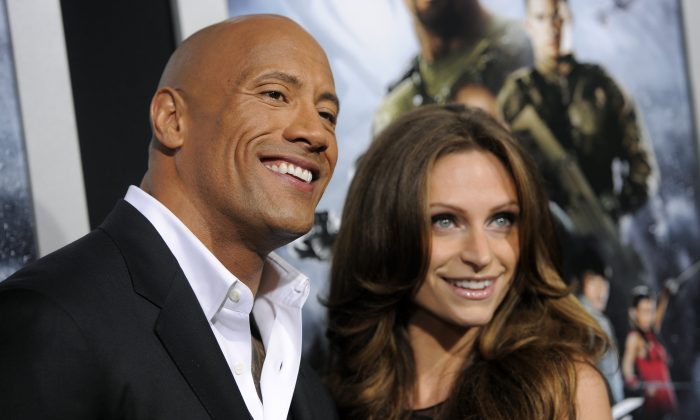 Dwayne Johnson, a cast member in "G.I. Joe: Retaliation," poses with his girlfriend Lauren Hashian at the Los Angeles premiere of the film at the TCL Chinese Theatre on Thursday, March 28, 2013 in Los Angeles. (Photo by Chris Pizzello/Invision/AP)
Entertainment

Lauren Hashian, the current girlfriend of Dwayne “The Rock” Johnson, surprised the public by appearing at the Hercules premiere several days ago.

The pair met in 2006 but they’ve only walked one red carpet–for G.I. Joe: Retaliation in 2013–together before.

Although the pair aren’t out in public much Johnson is very much in love.

“To fall in love again? That’s a hard thing to do twice in the position I’m in. I’m one lucky son of a [expletive],” he told People magazine.

“She embraced and loved me at my very worst and lifted me up to be my very best,” he added to THR.

Johnson was a student at the University of Miami when he met Dany Garcia. They were eventually married, but were divorced in 2008.

Johnson was in a bad place after the divorce, but Hashian helped support him. She’s a strong supporter of his, even helping him at a bad moment just last fall–when the news came that Paul Walker died.

“I was driving with Lauren when she immediately turned very quiet and was looking at me, studying, wondering if I knew,” he recalled of that November day.

Dwayne Johnson, left, and Lauren Hashian arrive at the premiere of “Hercules” at TCL Chinese Theatre on Wednesday, July 23, 2014, in Los Angeles. (Photo by Jordan Strauss/Invision/AP)

“I pulled over and looked at my messages and had a moment where I just caught my breath. We said a prayer right then to give his daughter strength — because we had talked about our daughters. That’s what we would talk about. Both of us were divorced, and we talked about the power of being a dad and the strong connection of a dad and his girl. Then once we got home, we started bawling.”

Johnson and Garcia had a daughter together, Simone, who is now 12 years old. Garcia is still a part of his life, overseeing his business empire, and her brother Hiram is Johnson’s producing partner, while her current husband Dave Rienzi is his conditioning coach.

As for Hashian, 29, she’s a writer-musician who lives with Johnson. She was one of the finalists of the 2005 competition show R U That Girl and has written songs for people including YaBoi Shad.

Lauren’s father was John Thomas “Sib” Hashian, a drummer who was a member of the rock band Boston.

See an Associated Press review of Hercules below.

Review: ‘Hercules’ is schlocky but entertaining

LOS ANGELES—You’ll have to say one thing for Brett Ratner’s production of “Hercules”: This movie has a sense of proportion. Running just over 90 minutes, the movie is often clunky, but at least it’s fast and unpretentious. And its likable star, Dwayne Johnson, manages to murder legions without ever seeming sadistic. Less violent than “300,” less compelling than “Gladiator,” this new addition to the sword-and-sandals genre seems likely to please the fanboy audience and stir up some impressive box-office numbers.

The film begins by recounting the legend of Hercules, with snippets of his famous 12 labors. But this is not the Steve Reeves version of the tale. Johnson’s Hercules (as envisioned by comic book author Steve Moore) is a flawed hero. Bereft over the murders of his wife and children, Hercules has joined up with a band of loyal comrades who will basically sell their services to the highest bidder. In other words, they’re mercenaries. But you can bet it won’t be too long before Hercules rediscovers a noble purpose. That happens when he is enlisted by the lovely daughter of the lord of Thrace to save her kingdom from civil war. Let the mayhem begin.

The story has a few twists up its sleeve, as heroes turn out to be treacherous and villains are more complex than first appearances suggest. There’s just enough plot to keep the movie lurching forward, and there are plenty of battle scenes to delight connoisseurs of carnage. (The movie’s PG-13 rating seems fairly lenient.) One problem with these battle scenes is the frenetic editing, an unfortunate staple of contemporary action pictures. On the positive side, the sets (by production designer Jean-Vincent Puzos, who also designed one of Ratner’s favorite movies, “Amour”) are impressive, and the crowd scenes, even if enhanced by CGI, stir happy memories of films like “Spartacus” and “Ben-Hur.”

The classy cast also elevates the picture. Ian McShane gives a droll performance as a soothsayer who’s always surviving predictions of his own death. John Hurt is working in the glorious tradition of Claude Rains in “The Adventures of Robin Hood” while Joseph Fiennes is doing a Basil Rathbone as his venal confederate. As the one woman in the troupe of mercenaries, Ingrid Bolso Berdal wields a mean bow and arrow. Tobias Santelmann (star of the Norwegian Oscar nominee “Kon-Tiki”) has an imposing presence as Hercules’ antagonist-turned-ally.

Some of these actors have won awards, but a trip to the dais is not likely to be in the future for our star. Still, Johnson plays his role with good humor and more conviction than Steve Reeves could ever muster. When he finally breaks free of his chains and bellows, “I am Hercules,” the audience responds with just the right degree of childish glee.

There are some neat 3-D effects, but as with so many recent 3-D offerings, the format doesn’t seem absolutely essential. The cinematography by Ratner’s frequent collaborator Dante Spinotti is vibrant, and the musical score by Fernando Velazquez is rousing. Most important, the pacing is snappy. It may sound like a backhanded compliment to praise this sometimes cheesy movie for never taking itself too seriously, but in a summer of bloated spectacles, this modesty should not be underestimated.