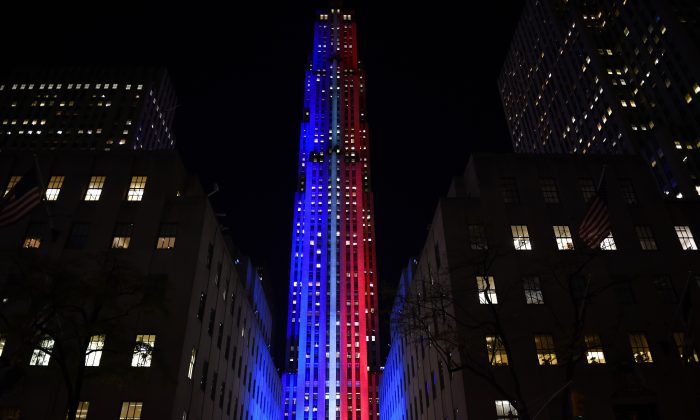 Rockefeller Center and Rockefeller Plaza is lit up in red and blue to mark the electoral progress of Hillary Clinton and Donald Trump on Nov. 7, 2016 as part of NBC's election night coverage. (TIMOTHY A. CLARY/AFP/Getty Images)
Politics

The Latest Numbers on the Election: Popular Vote, Counties Won

While Hillary Clinton won the popular vote by at least 2.5 million votes, Trump won more than 2,700 out of 3,143 counties across the United States.

Trump, however, won the Electoral College by 74 votes, with Trump winning 306 to Clinton’s 232. Michigan was officially called for Trump on Monday.

According to The Atlantic, Clinton only won approximately 420 counties in all, which according to the report, is “far fewer than any popular vote winner over the past century.” It added: “In the roughly 3000 counties beyond the 100 largest, Trump trounced Clinton by about 11.5 million votes. In the decisive states of Michigan, Pennsylvania, and Wisconsin, the electoral map was a sea of Republican red interrupted only by lonely blue islands in big cities and college towns.”

Trump won significantly in rural America, but Clinton took the most populous urban counties. The 163 counties with the most voters have the same population as the next 2,939 counties. And in those 163 counties and where 64 million ballots were cast, Hillary Clinton won by 13.7 million, reported The Telegraph.

Meanwhile, the Brookings Institute think tank said that the 420 counties that Clinton won generated 64 percent of America’s economic activity in 2015, and the 2,600-or-so counties Trump took generated a mere 36 percent.

“This is a picture of a very polarized and increasingly concentrated economy,” Mark Muro, of Brookings told the Washington Post.

“With the Democratic base aligning more to that more concentrated modern economy, but a lot of votes and anger to be had in the rest of the country.”