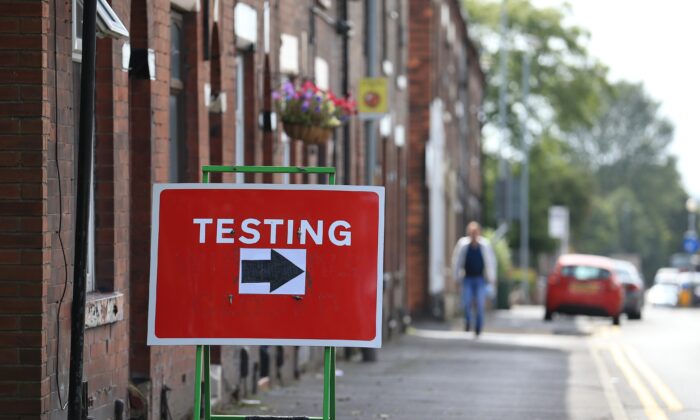 A sign shows traffic where to turn to enter a CCP virus testing centre in Oldham, England, on Aug. 20, 2020. (Lindsey Parnaby/AFP via Getty Images)
UK

England’s Test and Trace system is still struggling to match the growing demands of the pandemic, according to new data, still reaching fewer than six out of ten close contacts of people who tested positive for the CCP virus.

The system has continued to improve turnaround times for tests, however, and the average distance travelled to testing centres has also fallen.

In total, almost 1.5 million people were tested for the virus in a week, according to the latest data for Oct. 22–28, published today (pdf).

The system is identifying growing numbers of close contacts of those testing positive for the virus, but is still only successfully reaching 59.9 percent of those people.

Government scientific advisors have previously said that the system needs to be reaching eight out of ten close contacts.

The system only approached that level in the summer.

Test and Trace was pitched as the lynchpin of the government’s strategy to tackle the spread of the CCP (Chinese Communist Party) virus.

The Government’s chief scientific adviser Sir Patrick Vallance recently accepted that there was “room for improvement” in the system.

Turnaround times for the in-person-test sites are picking up, with 62 percent delivering results within the 24-hour window promised by the government.

But contact-tracing may not be the weakest link in the chain when it comes to identifying and quarantining people who are potentially infected.

Just 18 percent of people with symptoms were self-isolating at the time, according to the research.

Today, Justice Secretary Robert Buckland suggested that one of the reasons the country had been forced into lockdown was because it had been “a huge challenge” to get people to comply with quarantine requirements.

His comments echo previous comments by the prime minister and scientific advisors.

But he said that enforcement and surveillance wasn’t the answer.

“I think it would be very ambitious of me to suggest that somehow we will be able to use the enforcement authorities to intervene in every case I think sadly that’s not possible.”