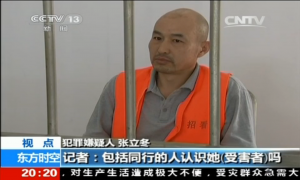 Sales at America’s most well-known burger place are down, and most of us have heard a lot about it. McDonald’s Corp. says overall sales have declined partly due to greater competition, and lagging consumer enthusiasm for McDonald’s brand of fast food—a situation it intends to fix as quickly as possible.

What is a little less understood is the role that China played in the decline of the World Famous Fries, Big Mac, Quarter Pounder, and Chicken McNuggets.

Comparable sales declined 3.3 percent in China and Japan, and comparable guest counts declined 4.7 percent, according to McDonald’s most recent 10-K filing, after a tainted meat scandal last year left restaurants without any beef or chicken for extended periods. A Shanghai supplier, the subsidiary of U.S.-based OSI Group Inc., was found to have distributed expired meat.

After McDonalds Killing, an ‘Anti-Cult’ Campaign in China Backfires

The situation induced fear in consumers who had already been sensitized to the frequency of food quality scares in China. Now, even its favorite Western restaurant was not immune.

Chinese authorities announced the shocking seizure of over 100,000 metric tons of frozen, expired meat, some of it as old as 40 years. Expiration dates were found from the 1970s.

The meat, worth $483 million, was being transported by smugglers apparently from Vietnam, through Hong Kong to China, where it was being passed to locals who would ferry it to wholesale markets in cities.

Chinese authorities announced the shocking seizure of over 100,000 metric tons of frozen, expired meat, some of it as old as 40 years.

According to China’s state mouthpiece CCTV, items seized included chicken feet, beef, and pork that had been treated with chemicals and bleach so they appeared fresh. According to reports, some of the meat had been transported in unrefrigerated trucks, causing the partially rotten flesh to smell.

McDonald’s acknowledged in a filing that food quality issues with a supplier negatively impacted results in China, Japan, and “certain other markets.”

“We moved quickly to source from alternative suppliers and initiated aggressive recovery plans to restore consumer trust and confidence,” the filing stated.

The Recovery Ticks Along

On Thursday, a McDonald’s representative told The Wall Street Journal the company is looking for a buyer for its 413 Taiwan stores, and that it plans to expand its franchise business in China.

The move fits squarely within the company’s stated strategy to shed its company-run stores and increase the number of franchises. The franchisee-run stores have performed better in recent years. In this case, it wants to license the stores to a foreign affiliate or developmental licensee.

McDonald’s CEO Steve Easterbrook announced in early May a plan to “shape McDonald’s future as a modern, progressive burger company.”

In addition to expanding the number of franchises beyond the current 80 percent mark, McDonald’s understands it needs to emphasize customer experiences, and manage better perceptions of value, as well as offer options like menu personalization.

In the Asia–Pacific region specifically, McDonald’s has aggressively focused on giving its stores a new image—completing 340 renovations in 2014—representing a total of 70 percent exterior and 60 percent interior updates. Over 650 stores were also opened in the region, with 227 specifically in China.

Globally, the company says it is focused on enhancing the appeal of its core products, addressing food perceptions by improving and highlighting the quality of its ingredients, engaging with customers, and offering guests a customizable experience.

Within the $1.2 trillion informal eating-out category that McDonald’s measures its performance against, McDonald’s accounts for 0.4 percent of 8 million outlets and 7.5 percent of the sales. The company operates 36,000 restaurants, and serves 69 million customers in over 100 countries each day.

Most of the particulars of McDonald’s reforms are yet to be made public. We can only watch and wait to see how the old drive-through burger joint will enter the modern age, and how it will manage quality and perception in a region where even the locals mistrust “Made in China.”