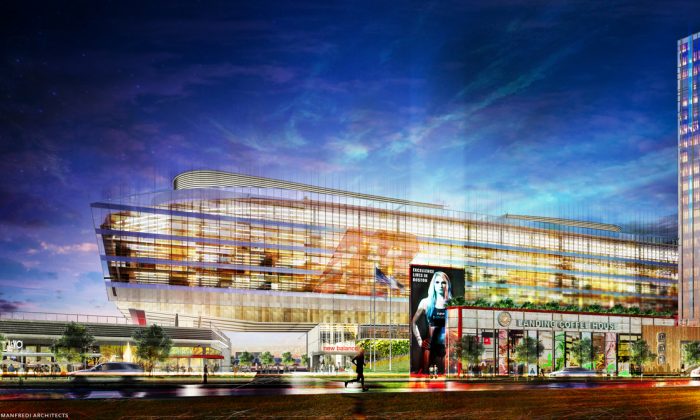 An architect's rendering of the Boston Landing project. (Courtesy of New Balance)
News

BOSTON—New Balance, the only American sneaker company that still manufactures its sneakers in the United States, broke ground Sept. 23 at its new world headquarters, Boston Landing.

New Balance is America’s third largest sneaker manufacturer, making most of its sneakers at its plant in Lawrence, Mass. The Boston Landing Development represents a serious investment by the owners of New Balance in the city that it has called home for more than 35 years.

The Boston Landing Development is estimated to cost around $500 million. It includes a 175-room hotel and three office buildings with retail and restaurant space.

It will also have a 300,000-square-foot sports facility with a hydraulic, banked running track. It will be one of only a handful of such tracks in United States. “The goal is to make this one of the fastest tracks in the country, drawing elite runners here, trying to set records,” Jim Davis, the owner of New Balance said at the groundbreaking ceremony.

The 14-acre site has long been a no man’s land. Nearby businesses are looking forward to the project’s completion in 2017.

“It’s going to bring a professional environment and development to Brighton Avenue,” said Peter Reed, of Ambit Creative Group. Its offices are right across the street from the site for the new headquarters.

Boston has a stringent community process for approving any new developments. Prospective developers must include park space, roadway improvements, and meet green development standards in order to get approval.

Boston Landing was no exception. The most ambitious feature of the project is the inclusion of a new stop on the Commuter Rail train line that serves the greater Boston area. This, along with bike paths and stands of Hubway bicycles, Boston’s bike sharing program, will encourage multimodal transportation to the area.

According to Lopez, the area has been labeled a Health and Wellness District, and New Balance intends to fill the office space with companies whose products and services align with this theme.

While plans for other area projects ground to a halt during the recent recession, New Balance pressed forward with its development plans.

Davis, wearing a crisp pair of New Balance sneakers with his suit, held back tears as he thanked Boston’s mayor of 20 years, Thomas M. Menino, for his dedication to the project.

“Jim Davis believes in our city and wants to stay in our city,” Menino said.

Throughout his tenure, Menino has been a stanch supporter of development in Boston neighborhoods. At the same time, he has put in place some of the most demanding environmental standards in the country.

Menino, who will not be running in this fall’s hotly contested mayoral race, has a popularity rating that always hovers around 85 percent.

The project is in the Allston/Brighton neighborhood of Boston.