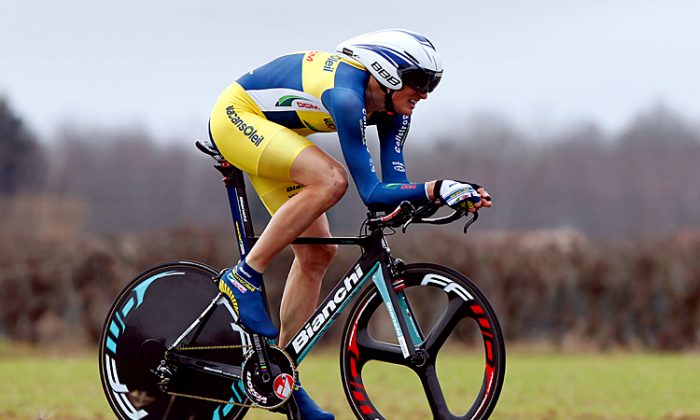 The 2012 Paris-Nice cycling race started under a dark cloud, quite literally. The opening stage, a six-mile prologue with a fair hill (1.1 km at 6.2 percent) started on wet roads and progressed to  steady rain, giving the early starters  the best opportunities.

Three-time Swedish time-trial champion Gustav Larsson of Vacansoleil-DCM made the most of his chance, turning in a time of 11:19, beating second-placed Bradley Wiggins of Sky by 1.53 seconds. Wiggins had the misfortune to ride in the rain, but he didn’t let the slick roads slow him much. He later told his team he was in the best form of his life.

Larsson’s ride is still noteworthy, and the 32-year-old Swede appreciated the win.

“It’s a nice circuit,” he told NBC Sports. “I had a little bit of wet roads but not that bad. I am really happy for actually winning—when I saw Wiggins so close, I was impressed that he was going so fast on the descent.

Larsson kept his perspective—he realized that the win was partly the result of the weather, and that his luck on Sunday likely wouldn’t last.

“Prologues are the best to win because then you get the leader’s jersey It’s a really glorious start to the year for me it is a good start and of course I hope to continue this.

“Of course, it is a big moment. It’s a really good moment for me. It’s not the Olympics and it’s not the Worlds, and I think the Giro d’Italia stage was also a nice race to win, but Paris-nice is a very, very nice race to be able to stand with the leader’s jersey.”

Disappointed by his time was defending champion Tony Martin of the new Belgian superteam Omega Pharma-Quickstep, who finished 28th, 25 seconds back.

The 2012 Paris-Nice race continue for seven more stages, wrapping up with an uphill finish which could likely decide the stage. It is there that the big names: Tony Martin, Andreas Klöden of RadioShack-Nissan, Levi Leipheimer of Omega Pharma-Quickstep, and Teejay Van Garderen of BMC, will probably settle the race.