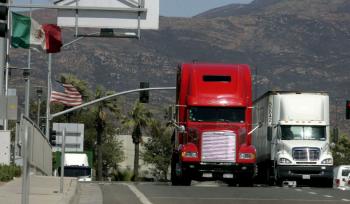 Antonio Perez
View profile
Follow
biggersmaller
Print
Trucking giant YRC Worldwide Inc. on Thursday said that it has successfully staved off bankruptcy after its bondholders agreed to an 11th hour swap of debt for stock that would eliminate the company’s $470 million in onerous debt.

The Overland Park, Kansas-based YRC is the largest U.S. trucking and logistics firm and was locked in a struggle with its bondholders to survive. The company, which ships industrial, commercial, and retail goods internationally, operates the Yellow and Roadway trucking networks in the United States.

In a statement on Thursday, the company said it had reached an accord with 88 percent of its bondholders, including 70 percent of its 8.5 percent note holders—the group that had been holding up the exchange.

YRC has already laid off thousands of workers and restructured its deals with labor unions and lenders over the past year. The company lost $1.1 billion in fiscal year 2008.

The attempt to restructure the company outside of the bankruptcy court was crucial for the company’s survival. Teamsters, the union that represents 30,000 YRC employees, had been urging lenders and hedge funds to buy into the debt-for-equity swap.

According to Teamsters, some bondholders would make money if the company failed in bankruptcy, because of certain derivative instruments they held.

As bondholders profit from YRC’s collapse, more than 30,000 U.S. jobs would be lost, the union said.

But in the end, it appeared that no lender wanted the bad publicity tied to having created YRC’s bankruptcy.

“What has happened in past with asset-intensive companies … that go bankrupt, is that there’s a kind of run on the bank, where customers flee in droves. The bankers [backing YRC] don’t want that to happen, and they’ll do what they have to,” Klaskow continued.

The company announced on Monday that no matter what happens, it would remain open for business this week.

Trucking firms are traditionally the bloodlines of the U.S. economy, which is more dependent upon trucks than railroads for logistics.

"The success of this note exchange marks a major turning point for YRC Worldwide—with our significantly restructured balance sheet and enhanced liquidity, we will move forward from a more solid financial foundation," said YRC Chairman Bill Zollars in a statement.

"Our comprehensive plan could not have been accomplished without the collective cooperation and continued support of our many stakeholders, including our lenders, our noteholders, and our employees."