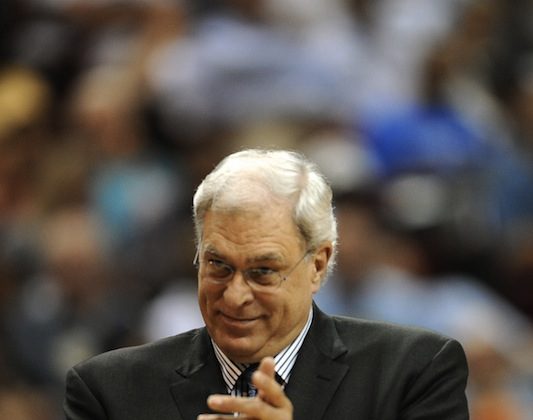 Lakers Will Regret Not Hiring Jackson

With Monday’s shocking announcement that former Lakers’ coach and 11-time NBA champion Phil Jackson would be passed over in favor of former New York and Phoenix head honcho Mike D’Antoni to lead the new-look Lakers this season, one has to wonder whether the powers that be will eventually regret the decision.

Put simply, if winning titles is the mark of success, they certainly will. Here are four reasons why:

1. A coach is more than his offensive system.

“I know the triangle,” said Lakers’ GM Mitch Kupchak (one of the powers that be) referring to Phil Jackson’s offense, according to a report on the team’s website. “Obviously I wasn’t convinced … We just didn’t feel the players we had on this team, the players we brought in would fit the triangle offense as well as what Mike D’Antoni would do.”

What D’Antoni will most likely do is install his fast-paced offense that thrived with current Laker point guard Steve Nash, center Amare Stoudemire, and a number of great shooters. D’Antoni guided Phoenix to three straight top-two conference finishes from 2005-07, though they never ventured to the NBA Finals—not bad.

Jackson though employed his triangle offense from the start of his days in Chicago (1989) with Michael Jordan, as a little more of an equal opportunity offense, and has run it ever since, winning 11 titles in 20 seasons—even better.

But if they were going to hire a coach based on the offense they would run, why not hire former NBA coach Paul Westhead to install his fast-paced set? Because there is a lot more to winning than offensive play-calling.

Players have to be motivated to run them, stars have to have their egos massaged, and the team still has to play defense on the other end of the court.

2. Jackson has a better track record on defense.

In all fairness to D’Antoni his Suns didn’t have as good of defensive players as this current Lakers team has. “Mike D’Antoni never had Dwight Howard, Metta [World Peace] and another 7-footer [Pau Gasol] in back of [Howard] either,” said Kupchak.

But in all fairness to both of them, he had newly-minted Defensive Player of the Year Tyson Chandler in New York for much of last season. After D’Antoni and the Knicks parted ways following last year’s 18-24 start, the Knicks focused more on defense and went 18-6 the rest of the way under Mike Woodson. This season, they’re off to a 4-0 start.

When Jackson had some of the game’s best defensive players in Chicago like Jordan, Scottie Pippen, and Dennis Rodman they won three straight titles—including an NBA-best 72-10 mark in 1996.

When Phil walked off the court last it was 2011 and the Lakers still had Kobe Bryant, Gasol, and Metta among other current Lakers on that squad. While D’Antoni had Steve Nash win a pair of MVP awards with him in Phoenix, Nash will be 39 in February and is currently out with a leg injury.

Even if he were healthy, the team is Kobe’s. He’s been the star since the late 90’s and Jackson has coached him for 11 seasons.

4. Come playoff time, no one compares to Jackson.

Eleven NBA titles speaks for itself though one can argue that no one has had the on-court talent that Jackson has had, which includes Jordan, Pippen, Rodman, Shaq, Gasol, and Bryant.

On the other hand no one led those teams to titles before or after him.

Chicago hadn’t even made the Finals with Jordan, Pippen, and Horace Grant before Phil came along and won six titles in nine seasons—and two of those seasons were during Jordan’s hiatus. They haven’t been to the Finals since.

The Lakers hired Jackson in 1999 after Del Harris had been unsuccessful in getting Shaq and Kobe to the final round. With Jackson at the helm from 1999-2004 the Lakers won four conference championships and three NBA titles.

After a year off Jackson came back for six more seasons and netted the Lakers two more titles and three conference championships.

In all Jackson has won 56 playoff series out of 65 in his career. Meanwhile, D’Antoni is five out of 10.

Put simply if you want a fast-paced offense, D’Antoni can definitely deliver. If you’re looking for titles Jackson is the answer.