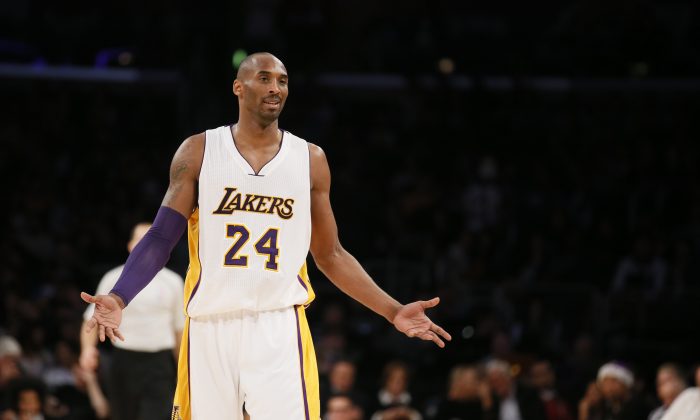 Los Angeles Lakers' Kobe Bryant reacts as he is called for an offensive foul against the New Orleans Pelicans during the second half of an NBA basketball game Sunday, Dec. 7, 2014, in Los Angeles. The Pelicans won 104-87. (AP Photo/Danny Moloshok)
NBA

The Los Angeles Lakers are trying to snap their losing streak against the Sacramento Kings on Tuesday night as the news and rumors ramp up.

Lakers General Manager Mitch Kupchak says that Kobe Bryant will retire after his contract, which runs through the 2015-16 season.

“All indications are, to me, from him, that this (two-year contract) is going to be it,” Kupchak told NBA.com.

“If somebody’s thinking of buying a ticket three years from now to see Kobe play, I would not do that. Don’t wait. Do it this year.”

Bryant has commented on the situation, telling Yahoo recently that he enjoys the grind of the NBA but when he stops enjoying it, he’ll retire.

“It’s a lifestyle, an absolute around-the-clock lifestyle. There’s no getting away from it,” Bryant told the website. “I’ve always enjoyed that aspect of it, the process of it, the building of it. But there will come a point when I don’t anymore, and then it will be over for me.”

Young Responds to Being Left Out of Lineup Change

Nick Young thought he might be part of the lineup change, but was left coming off the bench. The change had Ronnie Price replace Jeremy Lin and Ed Davis replace Carlos Boozer in the starting lineup.

“If they want me to start, I’d like to hear my name called in that starting lineup, some time. See how it feel to play with Kobe a little bit more, but I’m comfortable,” he told Lakers Nation.

Young did admit that the change affects both the starters and the bench, as he had to adjust to playing more with Lin and Boozer.

“Jeremy Lin likes to look for his shot a little bit more than Ronnie Price, so we have to adapt to different players playing different positions,” he said.

Young also joked that he laid down rules for Lin and Boozer.

Coach Byron Scott said that Young will likely not start.

“I think he loves coming off the bench and I think he likes that role as well,” Scott said of Young, reported the L.A. Daily News. “There’s not whole lot of guys in this league that are comfortable and accept that role. But Nick is one of those guys.”

Boozer did say that he sought advice from Young about staying warm off the bench.

“It’s different coming off the bench. I’ve never come off the bench my whole a career,” he told the Los Angeles Times.

“I talked to Swag about it, trying to stay warm on the bench — things like that. Hopefully we can start getting wins, if it works.”

Boozer had his streak of starting 569 consecutive games snapped with the demotion.

“But from basketball standpoint, I had to make a change because I wasn’t getting what I needed from that first unit, so I made changes.”

Scott also said he met with Lin, who took his removal pretty well.

“This is one of the toughest situations I’ve been in every since I played the game of basketball,” Lin said. “It’s tough, but I believe God has me for a reason and I just keep working.”

And Scott said he felt good that Boozer wasn’t happy about the promotion. “Wouldn’t expect him to be pleased,” reporter Mike Trudell paraphrased Scott as saying.