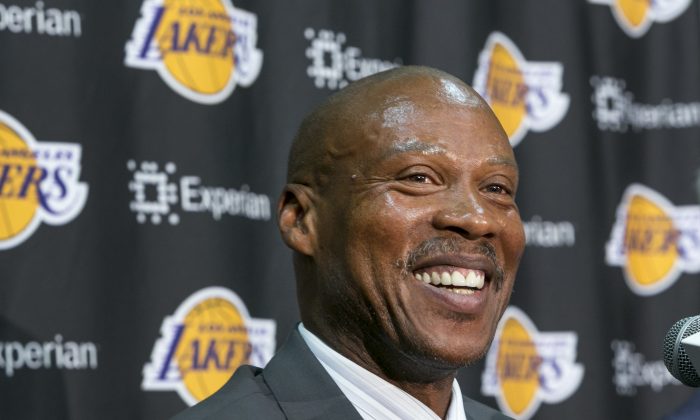 Byron Scott smiles as he is introduced as the successor to Mike D'Antoni as the Lakers' head coach, in a multi-year contract during a news conference in Los Angeles Tuesday, July 29, 2014. Scott is the former head coach for New Jersey, New Orleans and Cleveland, reaching two NBA Finals with the Nets. He was the NBA's coach of the year in 2008. (AP Photo/Damian Dovarganes)
US

Los Angeles Lakers coach Byron Scott, hired last month, says that defense is the team’s No. 1 priority for the 2014-2015 season.

The Lakers had an abysmal 27-55 record in the 2013-2014 season and were last in the Pacific Conference behind the Sacramento Kings.

As indicated by his previous comments, Scott thinks the Lakers’ defense–or lack thereof–is one of the culprits for the team doing poorly. The Lakers gave up a bad 109.2 points per game last season.

Over the weekend, he tweeted that his top priority is “to get our team to play defense on a consistent basis every single night.”

“Accountability is obviously the first step. Desire & dedication are the next steps,” Scott added, using the official Lakers account.

Scott was a member of the Showtime Lakers in the 1980s, winning three titles. He also played with Kobe Bryant during his last season in 1996-1997.

“He was the most mature 18-year-old I had ever come across. He kind of kept to himself,” Scott wrote, referring to Bryant at the time, according to the Los Angeles Times.

With new acquisition Jeremy Lin and guard Steve Nash, he said, “We will have our share of PnR because of those two guys & because of Kobe as well.”

He also wrote: “I like what I saw of Jordan Clarkson. Think he’s got great potential. I look at him now as just a guard, not a 1 or 2.”

According to Lakers Nation, Ed Davis and Nick Young were spotted at the Lakers practice facility over the weekend. The two were recorded on the Lakers’ Vine account.

Davis recently signed a $2 million, two-year deal with the Lakers. Young also resigned with the team.

“I like Ed’s size. He’s very good around the basket & can also block shots. He’s gonna have to play in the post,” Scott said of Davis.