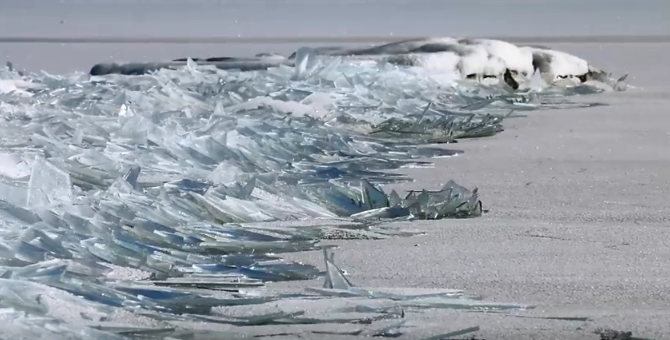 A screenshot of the video that captured the ice shattering on Lake Superior. (YouTube)
Social Media

A Minnesota photographer captured an incredible video of ice shattering on a frozen lake in Minnesota.

Dawn LaPointe of Radiant Spirit Gallery was on the shore of Lake Superior near Duluth when she noticed the ice had pulled away.

“I anticipated there would be some ice stacking as the massive sheet of ice met the shorelines, so I headed to Brighton Beach. The big lake did not disappoint!” she wrote on Facebook.

“As the water opened up, the sea smoke was whisked across the surface by the breeze. The sparkles visible in some segments were from the sun gilding the frost flowers that had formed on top of the new ice overnight – icing on the cake!”

“The seemingly endless ice sheets broke into large plates and stacked on shore, sounding much like breaking glass,” she noted on YouTube.

The conditions during the filming ranged from -8°F to +3°F air temp, with winds reaching up to 10 miles per hour.

LaPointe also noted that the video was shot at normal speed, despite it looking to some like it was sped up.

“Some ice stacking events move more slowly, especially when the wind is weaker or intermittent,” she said. “The large sheets of ice shown in this video had pretty good momentum from sustained winds, but at one point the ice came to a groaning halt and the silence seemed almost deafening; it was a little eerie”