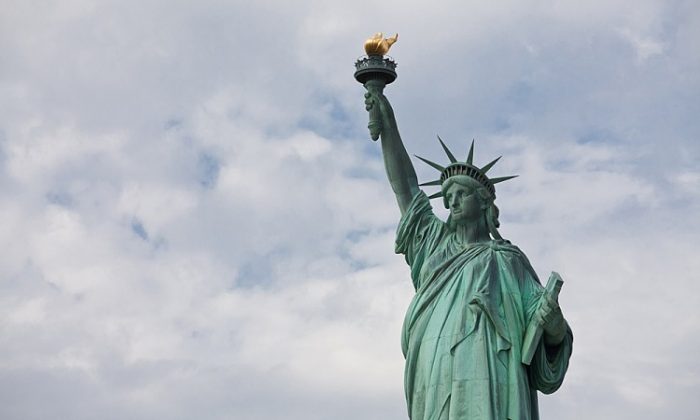 Tourists pose with a Statue of Liberty impersonator in Battery Park in New York on Jan. 17. (Samira Bouaou/The Epoch Times)
US

NEW YORK—At dawn’s early light, the morning after Hurricane Sandy made landfall in New York City, the Statue of Liberty’s silhouette outlined the harbor skyline, a survivor of 90 mph winds and a storm surge that had 75 percent of Liberty Island underwater.

Nearly three months after the storm slammed New York City, Lady Liberty still stands tall—but she is lonely. Liberty Island, the 12-acre island that is her home, remains closed due to storm damage. The docks, utilities, backup generator, and wastewater system were destroyed, and the brick pathway suffered severe damage.

“We are frozen in time. It is like it was 10 weeks ago,” said Mike Burke, COO of Statue Cruises, the authorized ferry service for the Statue of Liberty and Ellis Island, where immigrants were processed in America’s early days.

With the city’s tourism hitting a record high of 52 million visitors in 2012, and a $30 million renovation to the Statue’s crown, which opened the day before Sandy hit, an additional 26,000 visitors were expected to see the American icon this year. The closure could not have come at a worse time for businesses that rely on the statue for their livelihood. As Congress debates the Hurricane Sandy Tax Relief Act, the Statue of Liberty is becoming the face of those left out in the cold without aid.

“New York City is the prime destination for U.S. tourism,” Burke said. “To not have the Statue of Liberty available to all these visitors, which for some is a once in a lifetime opportunity, is a scandal.”

Statue Cruises has not been able to take passengers to the island since the storm hit. The company lost 80 percent of its revenue, forcing it to lay off 130 people, which is 75 percent of the company’s workforce. Evelyn Hill, the food and souvenir concessioner for Liberty and Ellis islands, laid off roughly 170 people. The security company, which performs the airport-like security screenings for everyone going on to the islands, laid off roughly 70 people.

To generate additional revenue Statue Cruises began offering an hour-long harbor tour, which departs from Battery Park, drives passengers past the World Trade Center, the Statue of Liberty, around Governors Island, and under the Brooklyn Bridge before returning to Battery Park.

Starting Sunday, Jan. 13, the National Park Rangers who were stationed on the islands will join the ferry tour. The National Parks Service hopes its presence will enhance the visitor experience.

Burke says if the park doesn’t open by April or May it would become exponentially more difficult for the company to stay afloat. “We are guardedly optimistic the park will reopen sometime in May or June,” Burke said. “There has been some indication of that.”

After touring the island, Burke believes repairs to the passenger dock, which suffered far less damage than the work dock, and other minor repairs, could be enough to get the island open without direct access to the statue.

Linda Friar, spokesperson for the National Parks Service (NPS), said she could not provide a timetable for reopening Liberty Island.

If the cleanup progress so far is any indication of how expeditious the recovery will go, tourists could be waiting for a while.

On Jan. 17, 80 days after Sandy hit New York City, workers and a crane began their first day of cleanup on the working dock at Liberty Island.

It was a hopeful sign, but Friar said the project was not from the aid package, but incident management funding submitted by an emergency response team. “Because it is a hazard to navigation, we were able to get emergency funding to remove it,” Friar said.

NPS has asked for $59 million for repairs for the islands, which is included in the nearly $60 billion package awaiting the Senate’s approval next week. Should the Senate approve the appropriations, Friar said receiving the funding and awarding contracts would still take time.

Friar said visitor safety was their top priority before reopening the island. “We hope to streamline it and move as quickly as possible,” Friar said.

Greg Mocarski, a captain for Statue Cruises, was out on the New York Harbor Thursday, shuttling passengers past the statue instead of delivering them to the Island like he has for the previous five years.

Mocarski’s grandmother arrived in America at Ellis Island. He expressed disappointment that nearly three months after the storm the symbol of America was still closed.

“It is sad when you see people come from half a world away to see (the Statue of Liberty) and have to look at the disappointment on their face when I tell them I can’t take them to the Island,” Mocarski said.

“It is a National icon. You are telling me we can’t do better than this?”