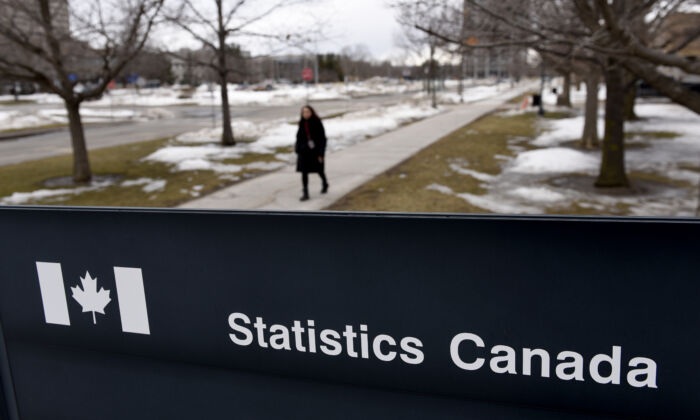 A sign outside a building at Statistics Canada in Ottawa on March 12, 2021. (The Canadian Press/Justin Tang)
Canada

Canada’s labour market surge and drop in unemployment over the past few months have driven up wages, which in turn could bring negative economic impacts like higher inflation, lower productivity, and increased cost of labour per unit of output, a prominent economist warns.

In November 2021, as Canada’s labour market continued its return to something resembling pre-pandemic levels, employers came up against a shortage of qualified workers. This led many to raise wages in order to entice new hires.

“Hiring workers at higher pay may seem positive for the economy, but can often translate into lower productivity, which raises unit labour costs,” Philip Cross, Munk senior fellow at the Macdonald-Laurier Institute and a former chief economic analyst at Statistics Canada, wrote in a recent commentary.

“This reinforces the upward pressure on inflation while eroding our ability to compete with firms in the United States.”

The economy added 154,000 jobs in November 2021, lowering the unemployment rate from 6.7 percent in October to 6 percent, which is getting closer to the pre-pandemic level of 5.7 percent in February 2020, according to data from Statistics Canada’s monthly labour force survey.

The November 2021 survey also found that the employment rate reached a record high of 80.7 percent for core-aged women (those aged 25 to 54) and increased to 87.1 percent for core-aged men, which is near historic highs for that group. For young people, including both males and females aged 15 to 24, their employment rate reached 58.1 percent, close to the pre-pandemic level of 58.0 percent in February 2020.

In Cross’s analysis, the employment rate was lagging only for the older population, mostly because a large number within this demographic chose to retire during the pandemic.

Meanwhile, “despite the proliferation of job vacancies, falling unemployment, and rising wages for new hires, the number of people in the labour force is not expanding quickly enough to prevent labour shortages,” Cross wrote.

Many employers have responded to the labour shortages by increasing wages for new hires—people on the job for three months or less. Across all industries, average wages for the newly hired were 10 percent higher in November 2021 compared to two years ago, Cross said, citing the labour force survey.

In contrast, average wages were just 6.4 percent higher during the same time frame for established employees—those with job tenure of more than 18 months.

“Eventually, established employees are likely to react to the higher wages being paid to new hires and demand similar increases, especially as they see their own purchasing power being eroded by higher prices,” Cross said.

The gap in wage increases between new and established employees is greater in industries with high job vacancies, which shows that these industries need to pay more to attract new workers, he noted.

One such example is the accommodation and food services industry, which has the highest vacancy rate—14.4 percent—for new workers among all Canadian industries. Since November 2019, average wages in that industry has jumped 8.5 percent for new hires, compared to 2.3 percent for established workers.

Cross said the narrowing gap between pay levels for new hires and established workers poses a major challenge for employers, who have to “balance the need to attract new people to fill the record number of vacant positions with adequately compensating long-time employees for their loyalty and experience.”

Business owners also have to be mindful of their companies’ competitiveness, he said.

“The problem for firms is that once the wage rate for established workers is raised, their total wage bill increases substantially and will be hard to reverse given the near impossibility of implementing wage cuts without devastating employee morale,” he said.

“The reluctance of employers to extend sharply higher wages to established employees means that higher labour costs are not yet embedded in the economy, giving the Bank of Canada the opportunity to dampen inflation by tightening monetary policy early in 2022.”

Cross said the shortage of qualified workers also means employers have to lower the educational requirements for some jobs.

According to the Statistics Canada November 2021 labour force survey, while employment in jobs that usually require a university degree expanded by 12.3 percent (roughly 490,000 people) over the past two years, workers with only a high school education or less filled 73,000 of these jobs, an increase of 43.4 percent.

Overall, among those with a high school education or less who were unemployed in October 2021, or wanted a job but did not look for one that month, 19.1 percent were able to find a job in November.

“This testifies both to the growing need of employers to fill vacant positions as well as how the end of the government [Canada Recovery Benefit] program is restoring the incentive to find a job,” Cross wrote.

As employers are forced to settle with less-qualified new hires, labour productivity is also taking a hit.

A Statistics Canada report released Dec. 3, 2021, shows that labour productivity in the third quarter of 2021 was 5.4 percent lower compared to the same period the previous year.

The drop in labour productivity combined with the wage increases in 2021 translates to a 6.2 percent increase in unit labour costs for employers in the past year.