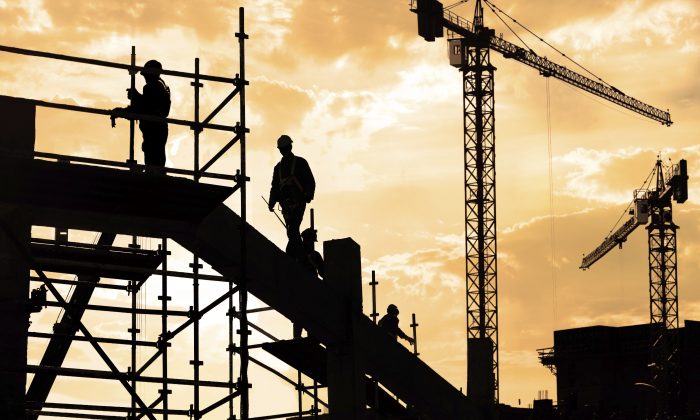 We don't often take time to remember the men and women who work hard to build our cities, who pave our roads, who make the little packaged items used in our daily lives. (sculpies/iStock)
Opinion

The lights come on at the flick of a switch. The PC boots up the world from home. The shower spews warm water, the coffee brews, the toast browns, the electric toothbrush works, soap does its job. Lucky ones get to bid adieu to loved ones before heading off to work like millions of others in America in transportation of some kind on paved roads monitored by traffic devices, which maintain a sense of order, and cross bridges that don’t collapse.

Such is life, taking existence for granted with nary a question about how all the substance in our midst came into being or the skill and labor behind it all.

Labor Day is a time to reflect, beyond lip service, on ‘Who done it?’

That’s all the more reason to praise the labor in Labor Day. So wondrous is it that the skill, ingenuity, and hard work of human beings from time immemorial have built society to what it is with raw materials from the earth. Our short time on the planet is more comfortable as a result and could easily prompt a comparison of labor to a mystery novel. In other words, Labor Day is a time to reflect, beyond lip service, on “Who done it?”

Celebrated the first Monday in September in the United States, Labor Day has been a legal holiday since 1894. Traditionally, it unofficially signals the last day of summer and the return of children to school. Seasonal roadside vegetable and ice cream stands in northern regions begin to shut down, while pumpkin patches and berry, apple, and grape vistas start to proliferate. The Finger Lakes in New York state celebrate with shoreline rings of fire, a Seneca Indian tradition of gratitude for a bountiful harvest. Across the country, politicians pile on platitudes about labor as the backbone of America. Some places have parades.

Labor Day deserves a heap of fanfare for the common man, the worker, with deference to Aaron Copeland’s classic, who comes and goes quietly, unobtrusively, unsung. Who can argue that American labor does its fair share in keeping secure the system of freedom and democracy, as it is often hailed?

Bumper sticker wisdom says that freedom isn’t free but so, too, labor, defined by Dictionary.com as a productive activity for wages or profit, has come at a cost. The movement for labor recognition in the United States began with the Haymarket Uprising in Chicago, in 1887, where seven workers lost their lives over a basic right taken for granted today: an eight-hour work day.

Bumper sticker wisdom says that freedom isn’t free but so, too, labor has come at a cost.

Eleven workers were lost building the Golden Gate Bridge, which took incalculable manpower with skill and derring-do to dynamite bedrock and secure towers underwater, do the millions of rivets, and make the cables and bolts hold the bridge up for the hundreds of millions who have crossed it since its completion in 1937. The Empire State Building represents 7 million man-hours of labor and 57,000 tons of steel also put up with Depression-era technology—and five workers lost.

Who mined and forged material into the parts for not only these structures but any structures past or present and gets them delivered to the work site on vessels, which, obviously, were designed and manufactured by unseen hands using tools made by even more unseen hands? And who works out logistics of transportation and works on the particulars to create the vessels that carry construction project parts? And on it goes.

Further philosophy on bumpers heralds that these colors don’t run. Indeed the colors on the flag are color fast. The workforce, much of it composed of veterans, is responsible. Vital necessities from armor to uniforms are all the production of labor.

Tidily packaged and presented products barely tell the story of where all these goods came from, or who done it.

As surely as the sun will rise the next day, food is a commodity taken for granted. Modern hunting-gathering amounts to a trip to the supermarket. Tidily packaged and presented products barely tell the story of where all these goods came from, or … who done it.

The shopping mall is like an evening out. The concert hall has comfortable seating and nice acoustics. The medical facility has the supplies and wherewithal to treat ailments. Someone developed the high-tech monitoring devices. Someone’s handiwork created blood gathering devices or instruments for the surgeon. Someone is even behind the bedpan!

Panama Thinks Big, Why Can’t We?

Aviation has come a long way from Kitty Hawk. Nowadays, who questions who did the horizontal stabilizer, which plays a life-death role in safe passage in a fuselage akin to an egg carton, also designed and tested for safety by dedicated, faceless people.

All things great and small play a part in the ecosystem of labor. William Shakespeare said something about life being a stage with a role for everyone. And the famous acting teacher Constantine Stanislawski added that there’s no such thing as a small role.

Maybe it’s a positive sign that “who done it” stays under wraps. Not knowing suggests things are going right.