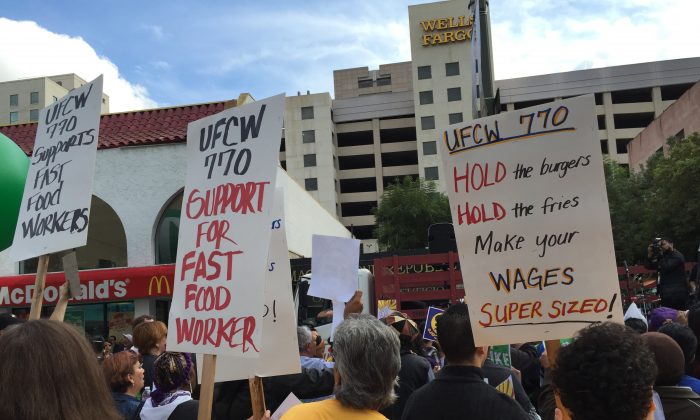 LOS ANGELES—Labor unions and low-wage workers have been pushing for a $15 an hour minimum wage for the last two years, with success in San Francisco and Seattle.

On Thursday, fast food workers and supporting organizations gathered in front of a downtown Los Angeles McDonald’s restaurant to demand a raise, along with other labor improvements.

“I’m on strike today because I’m tired of the unfair treatment and the total lack of respect they give us at the workplace,” said Jose Paz, who has worked at McDonald’s for three years.

Paz is a student and lives with his parents. Even with his savings on rent, his earnings still don’t cover his tuition and phone bills.

His friend, Maria Bernal, who also works at McDonald’s, wishes she had tuition to pay. Instead she works to support her three younger sisters, along with her parents, who are sick and cannot work.

“I’m 20 years old, and I can’t go to school because I have to work two jobs just to support my family,” said Bernal. “I wish we could have that $15 an hour. It would really help a lot for us.”

Paz and Bernal both earn $9 an hour, which is California’s current minimum wage.

A small group stormed the McDonald’s store at one point, shouting, shaking rattles and blowing whistles. They dispersed soon after.

The crowd then marched to City Hall for a rally. Organizers say similar actions were planned in about 190 cities across the country on Thursday.

Business groups and company representatives dismissed the recent “Fight for $15” protests saying they were orchestrated by unions who are trying to boost membership and generate headlines.

McDonald’s said in a statement the company respected the workers’ rights to protest but didn’t take responsibility for wages.

McDonalds, like other restaurants, argued that if their wages were to reach $15 an hour, it would cause menu prices to rise.