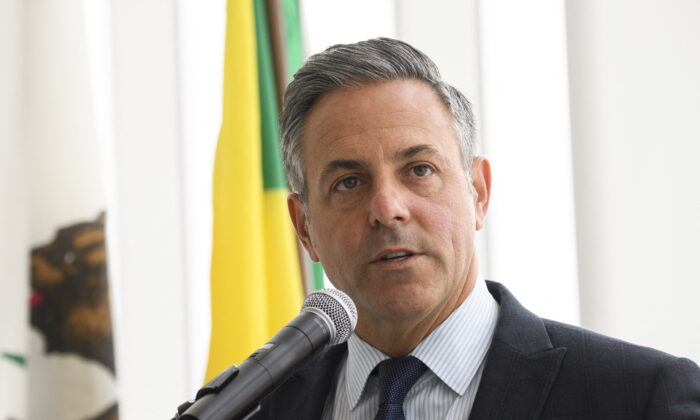 “I normally don’t believe in recalls but what I’m seeing shocks the conscious so much that I can no longer remain silent,” Buscaino said. “We cannot afford to wait another two years to get George Gascón out of office.”

“I think you’re seeing a lot of people get behind this effort,” recall spokesman Tim Lineberger told The Epoch Times. “We’re grateful to have this support we hope more Los Angeles leaders, elected officials, and candidates will get behind us as well. We’re certainly grateful for the support and hope everybody supports this effort and brings attention to this issue.”

More than 30 cities in LA County, including Torrance, Santa Clarita, Lancaster, and Beverly Hills, support the recall, with more than a dozen passing votes of no confidence against Gascón.

“He’s not doing the one job he was elected to do by the people of Los Angeles,” Buscaino said. “If we cannot guarantee the most important function of local government, public safety, then we cannot accomplish any substantive evolution as a city.”

Gascón was elected in Dec. 2020 on a promise to reform the criminal justice system in the wake of protests and riots following the death of George Floyd.

Since then, residents and politicians alike blame Gascón’s progressive policies for the rise in crime, particularly homicides.

While Los Angeles’s data shows crime has dipped in some categories, like robbery and property theft—potentially due to underreporting, some say—murder is up 94 percent over the last two years, according to the sheriff’s department.

One of Gascón’s early policies issued in 2020 directed prosecutors to no longer seek sentencing enhancements for suspects who use a gun during a crime or if they have a gang affiliation. His reasoning was the majority of those incarcerated belonged to long-disadvantaged groups.

He also supported the controversial zero-cash-bail policy put in place during the pandemic and made national news headlines last week when he, under his policies, chose not to prosecute a transgender woman in adult court who sexually assaulted a child when she was 17.

Buscaino, a Democrat, has been outspoken about issues plaguing the City of Los Angeles regarding homelessness, the economy, and crime—often clashing with his colleagues and local activists.

In addition to supporting the recall campaign, Buscaino supports banning homeless encampments with the help of law enforcement, lowering officials’ salaries if homeless goals aren’t met, and supporting the reinstitution of cash bail in the county.

This is the second attempt to recall Gascón. A previous version failed to gather enough signatures by an end of October deadline, but was restarted after the group regrouped and reorganized. The group raised $2.5 million to catapult the campaign in December.

The Los Angeles County Registrar approved the recall campaign’s petition on Jan. 27. Organizers now have until July 6 to gather about 566,857 signatures to get the recall on the November ballot.

If the recall effort fails, Gascón will continue his term until 2024.

Jill McLaughlin contributed to this report.