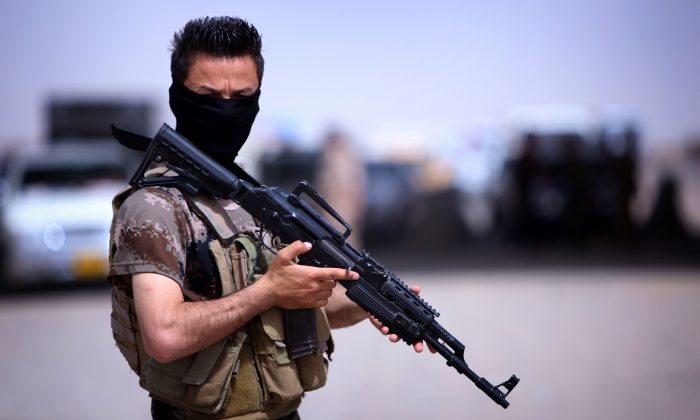 A masked Peshmerga fighter from Iraq's autonomous Kurdish region guards a temporary camp set up to shelter Iraqis fleeing violence in the northern Nineveh province, in Aski kalak, 40 kms west of the region's capital Arbil, on June 13, 2014. Thousands of people who fled Iraq's second city of Mosul after it was overrun by jihadists have been queuing in the blistering heat, hoping to enter the safety of the nearby Kurdish region and furious at Baghdad's failure to help them. (Safin Hamed/AFP/Getty Images)
Middle East

The Kurds have no friends but the mountains, runs the adage. Marginalised, dispossessed and oppressed in their historic homelands, Kurds have long lamented a lack of powerful allies willing and able to take their side in the cut and thrust of geopolitics.

After last week’s stunning capture of Mosul, Iraq’s second-largest city, by the forces of the Islamic State of Iraq and the Levant (ISIL), the Kurds may find their friendless days are over. As ISIL fighters menace Baghdad, Kurdish peshmerga brigades remain the only viable military counterweight to the jihadist group in Iraq. The prospect that ISIL could take all of Iraq fills Middle Eastern and western capitals with horror.

ISIL, an offshoot of al-Qaeda, has swallowed up swathes of territory across northeastern Syria and western Iraq. Mosul, on the banks of the Tigris some 400 kilometres north of Baghdad, will be of significant strategic value as the group seeks to establish a so-called caliphate straddling the Syria-Iraq border.

Some of Mosul’s Sunni residents, who have looked on the mostly Shiite Iraqi security forces as occupiers, may see ISIL as liberators. What locals make of ISIL’s severe interpretation of Sunni Islam remains to be seen.

For many, ISIL’s intention to impose an unbending form of Islamic law was too much to countenance. Up to 500,000 refugees have surged into the territory of the Kurdistan Regional Government (KRG).

KRG prime minister Nechirvan Barzani called on Kurds to assist those fleeing Mosul, which is home to Kurds as well as Arabs, Turkmen, Assyrians and Chaldeans. Barzani’s government also called on the UNHCR to provide relief for internally displaced peoples and made assurances that units of Kurdish peshmerga (“those who face death”) were standing by to prevent the advance of ISIL units into Kurdish territory.

Kurds Can Be Much-Needed Reliable Ally

In the face of the extremist threat posed by ISIL, it stands to reason that the west will view the Kurdish administration more favourably. They emerge as the most stable and reliable ally in Iraq, and potentially in the wider region. Long cast as underdogs, their claims overlooked by the Great Powers during the post-World War Two carve-up of the Middle East and ever since, the Kurds can expect many a suitor as events unfurl.

Not least among those suitors will be a shell-shocked Baghdad regime and Washington. Calls are already being made for Washington to throw its weight behind the Erbil-based Kurdish regime and to drop its opposition to the Kurdish goals of autonomy in both Syria and Iraq.

While the Kurds are likely to see their diplomatic stocks rise, they also stand to gain strategically. When Iraqi security forces abandoned Kirkuk, as they had done in Mosul, Kurdish peshmerga brigades stepped in to take control of the historic city.

Kirkuk, home to a diverse Arab, Turkmen and Kurdish population, has long been a bone of contention between Baghdad and the Kurdish administration in Erbil. A referendum planned for 2007 to determine whether Kirkuk and its oil-rich surrounds should be incorporated into the Kurdish entity never came to pass. All three groups – Arabs, Kurds, Turkmen – still lay claim to it.

In the chaos of the ISIL advance and the Iraqi army’s capitulation it may be that the matter is finally settled to the advantage of the Kurds. For once, the cards may have fallen the Kurds’ way.

Immediately after the fall of Mosul, Iraqi government figures proposed an alliance with Kurdish peshmerga brigades to retake the city. Kurdish forces are widely recognised as being better trained and more effective fighting units than the Iraqi army. Peshmerga last week reportedly fought off an ISIL assault on Sinjar, 120 kilometres west of Mosul, home to the Yezidi religious minority.

ISIL has since advanced so far on other fronts as to take towns on the Iranian border. These territorial gains mean any counterattack on Mosul from Iraq proper is unlikely.

ISIL’s rapid advance has been made possible by Iraq’s fractious and polarised political system. Many predict the country will fragment along sectarian – Sunni and Shiite – lines. The ISIL threat, however, has galvanised Kurds not only in Iraq but across the region. Beset by infighting and fratricidal squabbling throughout their history, Kurds and their diverse political organisations are now seeking to work in concert.

In Turkey, the political wing of the outlawed Kurdistan Workers’ Party (PKK) announced that PKK operatives will join the fray alongside KRG peshmerga should it be necessary. In northern Syria, the Kurdish Democratic Unity Party (PYD), which has carved out a statelet from the rubble of the civil war with Bashar al-Assad, has also proposed its forces be made available for action alongside KRG peshmerga against ISIL.

Co-operation, rather than confrontation, has been the Iraqi Kurds’ ticket to success in recent years. With de facto self-government since the end of the first Gulf War in 1991, and since attaining special status under Iraq’s new constitution in 2005, the KRG has capitalised on changing economic and political circumstances to create stability and foster progress in their corner of Iraq. Rather than rashly seceding under the umbrella of US protection, the Kurdish regime has continued to operate within the framework of a sovereign Iraq.

Exploiting local oil reserves, Iraqi Kurds have steadily built economic links across the region. In particular, they have won the confidence of neighbouring Turkey, which is home to a significant, at times restive, Kurdish population. The KRG has also fostered a functioning, if not flawless, model of participatory democracy, in which minorities are represented and free from repression.

This steady-as-she-goes approach has charted a course through many obstacles and brought sizable gains. The Kurdish approach has been measured and moderate in a region that seems prone to the opposite.

With the peshmerga firmly ensconced in Kirkuk, a city that Kurds have long envisaged as a capital, it is hard to see them being dislodged. At present it appears the Kurds are the sole beneficiaries of the US-led invasion of Iraq in 2003.

The situation must be a long way from how then-US president George Bush imagined things, but the Kurds are now best placed to provide the “dramatic and inspiring example” of stability and progress for the region that Bush invoked before the war.

William Gourlay does not work for, consult to, own shares in or receive funding from any company or organisation that would benefit from this article, and has no relevant affiliations. This article was originally published on The Conversation. Read the original article.