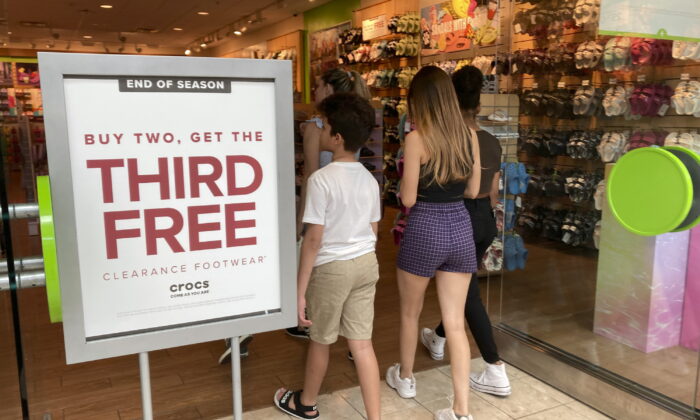 Kohl’s slashed its expectations for the year after sales slumped in the second quarter, sending shares down 9 percent at the opening bell Thursday and closing out a mixed week for retailers.

The company that owns Coach and Kate Spade also issued a sales outlook for the year that fell a bit short of Wall Street expectations, sending its shares lower on a day when broader markets bounced higher.

Kohl’s has struggled for years and spiking inflation on top of rapidly evolving patterns of consumer spending have exacerbated its problems.

Those same forces have tripped up major retailers as well. Both Target and Walmart released quarterly earnings and they too are wrestling with inflation and shifting demand.

Sales at Kohl’s fell to $4.09 billion in the second quarter compared with the $4.45 billion during the same stretch last year.

Sales at stores open at least a year, a key gauge of a retailer’s health, slumped 7.7 percent.

That is well short of Wall Street’s per share projections of $4.04.

Americans are pulling back on spending for non-essential items as prices soar and they’re also spending their money elsewhere as the waning pandemic allows more freedom of movement. Last month, Kohl’s ended exclusive talks with Franchise Group, the owner of Vitamin Shop and other retail outlets, for a buyout deal potentially worth about $8 billion.

At Tapestry, the luxury goods retailer that owns Coach and Kate Spade, quarterly sales were essentially flat at $1.6 billion, but rose 15 percent to $6.7 billion for its full fiscal year.

Shares of Tapestry slipped about 1 percent.

On Wednesday the Commerce Department reported that retail sales were flat last month after having risen 0.8 percent in June. Sales were down 0.5 percent at department stores and 0.6 percent at clothing stores.

By Anne D’Innocenzio and Michelle Chapman