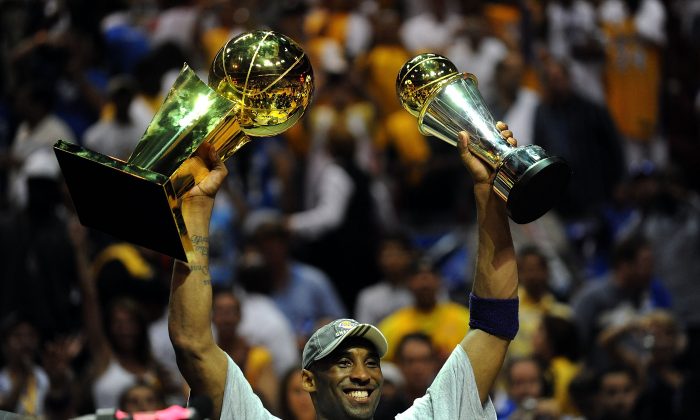 Kobe Bryant is retiring after this season, and when he does the game will be losing one of its all-time greatest players. The longtime Laker, 5-time NBA Champion, 11-time first-team All-NBA selection, and former MVP ranks only slightly behind Michael Jordan in terms of greatest shooting guards in NBA history.

Sure, Bryant wasn’t always regarded as the best teammate or most likable player, but he delivered on the court. Here are his seven best moments.

With Shaquille O’Neal a member of the Heat by this time, the Lakers were unquestionably Kobe’s team—and not much else. Suddenly in a mediocre squad, Bryant won a pair of scoring titles in 2006 and ’07, and this was his second-greatest scoring performance during that time period—18 of 31 from the floor and 22 for 25 from the stripe in a win where the Lakers held a 34-point lead after three quarters. There was no need for Bryant to play in the fourth, and so he didn’t.

Up 2–1 in the series as the seven-seed against the second-seeded Suns, the Lakers needed to make every shot count in Game 4 to keep momentum on their side and Bryant was up to the task. Down 90–88 with 7.9 seconds left and with Phoenix inbounding the ball, the Lakers got a steal. Bryant ended up with the ball at the other end and hit an impossible-looking, high-arching layup over and around a pair of defenders to force overtime. Then in the extra period, the Lakers trailed 98–97 with just 6.1 ticks left when Bryant ran down a loose ball at mid-court (following a jump ball) and ran down and hit the game-winning jumper as time expired.

Bryant was always compared to Jordan, and in MJ’s final season the 24-year-old Bryant salivated at the opportunity to play against him one more time. Although Jordan was 40 by this point, he put up 23 in the loss as Bryant torched him and the Wizards for 55 big ones while draining nine threes in a 108–94 Lakers win.

This was the beginning of yet another Lakers dynasty. Coming into the season, the proud franchise hadn’t won a title since Magic Johnson and Kareem Abdul-Jabbar cut down the nets in 1988. But Los Angeles won 67 games that year to snag the top seed in the Western Conference and gain homecourt advantage throughout the playoffs—they would need it.

Trailing by 15 points in the fourth quarter of the winner-take-all Game 7 of the conference finals against vaunted Portland, Phil Jackson’s squad pulled off a last-second miracle—reeling off 15 straight points at one point to erase the deficit—and Bryant’s alley-oop to Shaq was the nail in the coffin in the final minute as the Staples Center went crazy. Bryant and the Lakers would then go on to the Finals where they would win the first of three straight titles.

Madison Square Garden is the biggest stage in the NBA and everyone wants to have their best game there. In 2009, Bryant out-paced every scorer in MSG history when he put up a then-record 61 points—while hitting all 20 of his free throws—in a 126–117 Lakers victory. The record would stand for nearly five years until Carmelo Anthony put up 62 for the Knicks in a win over Charlotte.

The Lakers were looking to get back on championship track in 2004 after falling to the Spurs in the conference semifinals the year before, snapping their three-year run as champs. After beating San Antonio in an epic series at the same point of the playoffs in 2004, topping Detroit in the Finals seemed like an afterthought—maybe that’s why the Lakers were suddenly so out of sync. LA dropped Game 1 at home and trailed most of Game 2 until Bryant happened.

The star guard’s straight-up three with 2.1 seconds left tied the game, woke up the crowd, and sent the contest into overtime. The Lakers would then ride the momentum to a much-needed win to tie the series before subsequently losing all three in Detroit as the Pistons won in five.

When Wilt Chamberlain scored a record 100 points in a game 53 years ago, it was thought to be an untouchable feat at the time—and it has been—but Bryant came the closest ever to touching it on this night.

“The Mamba’s” historic game against Toronto came just a month after his 62-point, three-quarter outing against Dallas and in a season where he averaged 35.4 points per game—the third-highest season average ever among those players not named Chamberlain. Bryant hit 28 of 46 shots from the floor—including seven threes—and nailed 18 of 20 free throws as the Lakers pulled away late for a 122–104 win.