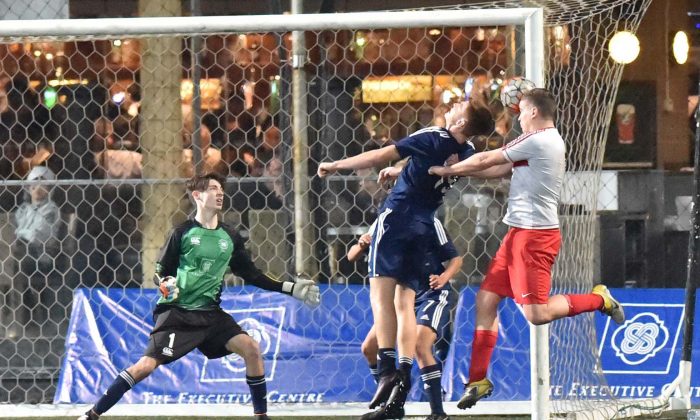 Fortunate escape for Colts from this Hearts corner as the Hearts attacker just mistimes contact with the ball. Colts in their Yau Yee League Cup game at Sports Road on Sunday Jan 15, 2017. Colts went on to win the match to progress to round 2. (Bill Cox/Epoch Times)
HK Football

Eastern Long Lions found the equaliser in the 54th minute through Miroslav Saric when he produced a close range finish after receiving a ball from Tsang Kam-to after he had received a pass from Manuel Rodriguez.

After further opportunities had gone begging or were well saved at both ends, Kitchee finally broke through for the winning goal in the 78th minute when a cross from Fernando Pedreira was converted by Jared Lum.

In the second division Hoi King were 2-1 victors over HKU CXSC Sun Source.

Central & Western lead the second division with 28 points, with Hoi King second with 26 points, and Tuen Mun third 23 points all from 11 games.

In the third division, Wing Go Fu Moon were 2-nil victors over Telecoms, and KCDRSC were

Happy Valley lead the division with 31 points and GFC Friends 2nd on 28 points both from 13 games. Wing Go Fu Moon are 3rd with 26 points from 12 games.