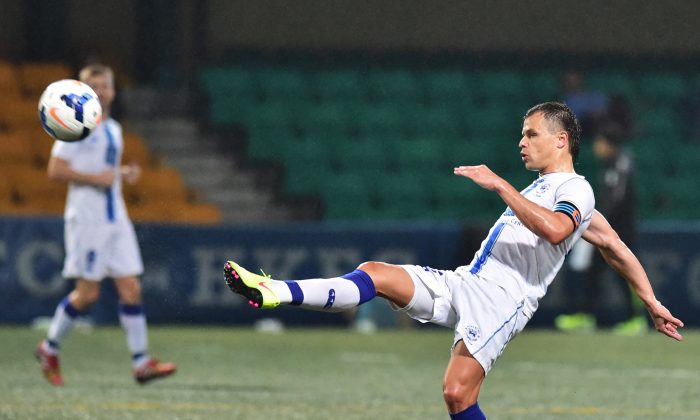 HONG KONG—HKFA Premier League saw two contenders for the title, play each other in rounds played over the weekend.

Saturday (March 14) saw the BOCG Life Premier League game between I-Sky Yuen Long and Wong Tai Sin played at Yuen Long Stadium. After a goalless first half, Wong Tai Sin took the lead in the 65th minute when Wong Chun-hin put Li Jian through, with Li scoring at the second attempt after his first shot was parried by goalkeeper Pan Tsz-kin.

I-sky Yuen Long equalised in the 70th minute when Yuan Yang converted Wellingsson De Souza’s cross and a final score of 1-all.

In Sunday’s (March 15) game at Sham Shui Po Sports Ground, YFCMD took on South China, and the game was settled 1-nil in YFCMD’s favour through a goal from Kenji Fukuda in the 29th minute.

In the evening game at Tseung Kwan O Sports Ground, second placed Eastern took on third placed Sun Pegasus. Sun Pegasus opened the scoring early in the 3rd minute when Admir Rascic converted Jaimes Mckee’s cross, and extended their lead in the 17th minute when Petrisor Voinea was released into the Eastern half, and progressed towards goal before chipping over goalkeeper Yapp Hung-fai.

Eastern pulled a goal back in the 35th minute when Miroslav Saric scored after reacting first after Dylan Macallister had headed on Rohan Ricketts’ corner, but Sun Pegasus still led 2-1 at the half-time break.

Sun Pegasus restored their 2 goal advantage in the 65th minute when Jaimes Mckee headed in Petrisor Voinea’s cross. However, Eastern reduced the deficit in the 81st minute when Giovane Da Silva converted a spot kick, and then equalised in the 87th minute when Miroslav Saric’s cross evaded Sun Pegasus goalkeeper Jarrad Tyson.

Metro Gallery Sun Source now lead the first division table with 51 points, with HKFC second with 50 points, Yau Tsim Mong third on 42 points, and Southern fourth on 38 points – the 3 leaders all having played 19 games, and Southern one less. Metro Gallery Sun Source and HKFC head into this Saturday’s clash at Sports Road for a game that is likely to determine which team lifts the championship.

Wing Yee now head the second division after 17 matches with 44 points, Mutual are second with 37 points, and Kowloon City are third with 35 points.

Tung Sing now lead the division with 50 points from 19 matches, with Central & Western district second with 47 points from the same number of matches.

Both semi finals in the Chairman’s Cup required a penalty shoot out to decide who would contest the May 9 final, and IES university 5-3 on penalties after the game finished 1-all in regulation. While CAPS were 6-5 penalty shoot out victors over Dynamo after their tie was 2-all after regulation.