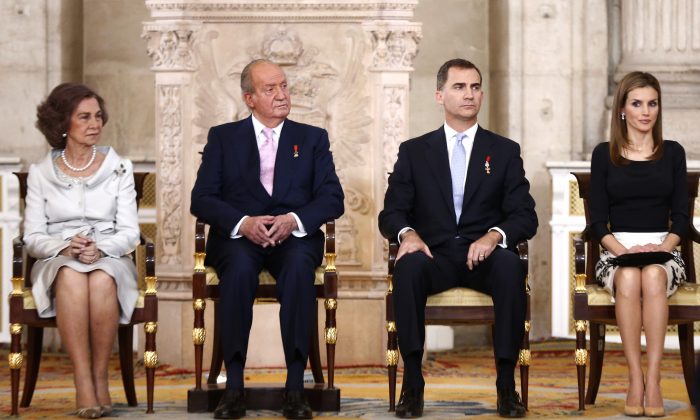 Spain's Queen Sofia, left sits with King Juan Carlos, 2nd left, Spanish Crown Prince Felipe, 3rd left and Princess Letizia before signing an abdication law during a ceremony at the Royal Palace in Madrid, Spain, Wednesday June 18, 2014. Spains Juan Carlos formally ratified the law, signing a legislation setting out the legal framework for the handover so his 46-year-old son can be proclaimed King Felipe VI at a ceremony in Parliament on Thursday. The 76-year-old monarch says he wants to step aside after a four-decade reign so that younger royal blood can rally a country beset by economic problems, including an unemployment rate of 25 percent. (AP Photo/Daniel Ochoa de Olza)
Europe

Rumors are swirling about an impending divorce between King Juan Carlos and Queen Sofia, especially following a recent insider report.

The rumors started after the king abdicated to his son and increased as the couple didn’t appear in summer photos as they traditionally do.

Then the Italian newspaper La Repubblica published a report saying that the abdication has “sped up a separation that has been hidden until now.”

It said that an “effective divorce” is imminent.

The king and queen allegedly took separate vacations, with Sofia traveling to the summer palace in Mallorca, and the king traveling various places including Colombia.

The couple has been together for 52 years but rumors have been circulating for many years that the king cheats on his wife.

El Universal claims that the couple has been living separate lives for many years and only see each other at official events and don’t even talk to each other unless required.

It noted that it’s an “open secret” that they are like this.

Catalan newspaper editor Javier Godó is reported to have advised the couple against formally separating to protect the instution.

If divorce does happen, the Spanish Royals blog notes that it could create complicated issues such as dealing with the Queen Mother’s role and legal status.