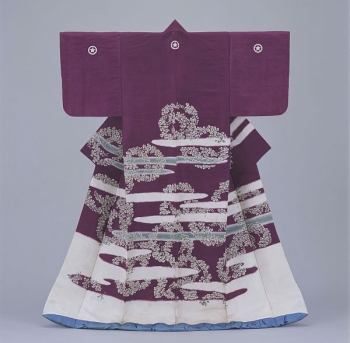 (Courtesy of the Immigration Museum)
US

The Kimono: Dress and Objet d’Art

The kimono is one of the most widely recognised pieces of clothing that is as paradoxical as Japan itself. Its apparent simplicity may, upon a closer look, reveal exquisite scenes embroidered with the finest silk thread or filaments of gold that catch the light just before one is about to look away. Even the plainest kimono offers something to admire in the texture and colour of the fabric.

Luckily, there is plenty of time to linger at the new exhibition of kimono and accessories direct from Japan on show for the first time in Australia at the Immigration Museum in Melbourne.

Kimono: Osaka's Golden Age showcases the sumptuous culture of the traditional kimono – its style, design, meaning and forms, as well as how to wear one.

On exhibition are around 60 highly decorated kimono, along with accessories such as shoes and hair ornaments from the late Edo (1603–1867) and Meiji (1868–1912) periods of Japan.

The kimono had its origins in China at its cultural zenith during the Tang Dynasty (618–907), which coincided partially with Japan's Heian period (794–1192). In China, the elite classes wore silk garments like the kimono at the time and robust trade between China and its neighbours meant that many countries were influenced by China's Tang Dynasty dress.

During the Edo period in Japan, the city of Osaka became the economic hub of the whole country and the centre of commerce. But despite their wealth, the merchants of Osaka held no political power and were not part of the noble class or even the class of public servants, so they compensated with lavish displays of wealth through fashion.

"In this era, everyone in Japan wore kimono – from farmers to warriors," comments Padmini Sebastian, manager of the Immigration Museum. "But Osaka's aristocracy and merchants opted for a spectacular display of wealth through their fabulous and flamboyant kimono by using the most expensive fabrics and the most intricate designs."

Some kimono were decorated with shibory patterns (a complex technique of minuscule tie-dyeing) that could take up to a year to complete.

Women had a range of 200 hairdos to choose from and the merchants' wives and daughters from Osaka and Kyoto were reputed for having the most stylish hairdos.

The exhibition showcases only a few examples of hairstyles, but they are enough to boggle the mind when it comes to their sculptural and alluring beauty.

The appreciation for the Japanese aesthetic is made that much easier by the abundance of information available regarding the symbolism of the decoration as well as the structure of the kimono on display. For example, it is interesting to note that unmarried women wore the furisode kimono with long flowing sleeves and married or working women wore the more practical short-sleeved kosode kimono.

Even more interesting, though harder to grasp for the Western mind, is the habit of teeth blackening. A set of feather-tipped brushes and black boxes stand as testimony on showcase that this – and eyebrow shaving – were marks of a woman's adult status.

There is also the ingenious fireman's outfit made from layers of quilted fabric that would be worn inside out and was soaked in water to protect the wearer during a fire. Once the fire was out, it was reversed to reveal the bold outer pattern, which also served as a public signal that the danger had passed.

The exhibition has so far proven popular with visitors of all ages.

Jan Molloy from the Immigration Museum's Public Programmes told The Epoch Times : "I think there's a lot of interest in the Japanese aesthetic. We've just hit a chord and it's been very successful."

Kimono in the exhibition include those worn by men and children as well, and a special area encourages families to actively experience how to dress in a yukata kimono. This interactive experience includes an information video on the kimono and how to wear it, as well as adult and child samples for visitors to try on.

"People are really interested in a way of life that is not as accessible as it used to be and people really value that the kimono are such works of art…so they are looking to them as something to look up to and look to for inspiration," said Ms Molloy.

Kimono: Osaka's Golden Age is now on show at the Immigration Museum, 400 Flinders Street, Melbourne until September 14, 2008. Tickets are $6 for adults and free for children/concessions.