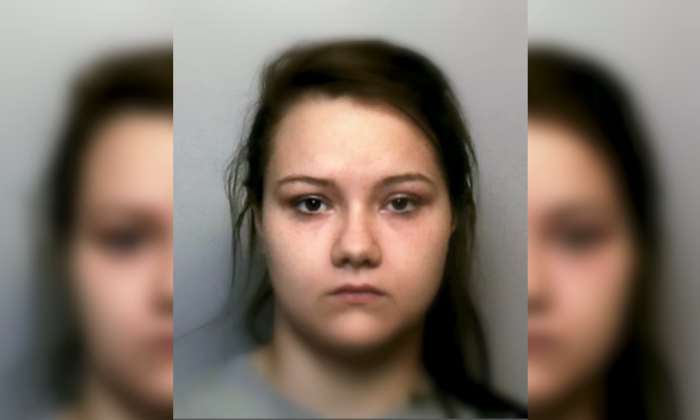 Cody-Anne Jackson sent her ex partner a photo of their daughter before she killed her. (Staffordshire Police)
UK

The father of a murdered 2-year-old has revealed that his ex-girlfriend sent him taunting text messages before suffocating their daughter to death.

One of the messages that Paul Hogan allegedly received from Cody-Anne Jackson was a photograph of little Macey just hours before she was killed.

“Sorry, just thought you deserved one last picture and memory of her,” the message stated, according to the Mirror.

Jackson reportedly smothered her daughter to death in a revenge attack after Paul Hogan broke up with her.

She was jailed for life in July 2017, and has been told she will spend at least 16 years in prison for the killing before she is eligible for parole.

Judge Michael Chambers said during her sentencing: “for a mother to kill her very young child who depends on her for protection above all others is a wicked and appalling act.”

Hogan told the Mirror that Cody-Anne Jackson sent him a barrage of incendiary and hurtful messages in the lead-up to the murder of little Macey.

About a week prior to the tragic incident, Hogan ended a three-year relationship with Jackson and moved out.

“We’d been arguing quite a bit and I thought it was just best if Macey didn’t see us arguing all the time,” Hogan said, according to the Mirror.

“We agreed I would just see Macey at the weekends,” Hogan said. According to the Metro, Hogan said that he “thought everything was fine” when he handed Macey back to her mother after spending time with her in October 2016.

But, according to the Metro,  in the hours before the murder, Hogan received a photograph of his daughter with the chilling message that what he was seeing was Macey’s “last picture and memory.”

Hogan told the Mirror that he never imagined Jackson would follow through with the implied threat.

“When she sent that picture of Macey, I thought she was just angry at the time and we’d be able to sort it out a day or two later.”

In today’s @DailyMirror: Paul Hogan tells me that he doesn’t think he’ll ever recover from his ex-girlfriend murdering their gorgeous little girl https://t.co/8vHAKL0ea4

But Hogan’s hoped proved misplaced, as Jackson did the unthinkable.

On Monday, Oct. 10, 2016, she made an emergency call, saying her daughter had stopped breathing. During her trial, Jackson admitted she smothered Macey to death.

It is reported that she wrote a suicide note before the murder, saying: “I do not want to leave her behind but I can’t go on either.

“There’s nothing for me or Macey, life’s [expletive].” She reportedly tried to kill herself after writing the suicide note.

According to the Mirror, Hogan has been overwhelmed with grief since the tragedy.

“It’s gone through my head over and over again,” he said. “I’ve blamed myself and thought about why she would have done it. It’s horrible.”

After killing her daughter, Cody-Anne Jackson made this ‘sham’ 999 call. She has been jailed for at least 16 years https://t.co/MuYr1Dpug3 pic.twitter.com/WMYYiFizkw

Hogan told reporters that he struggles to gain closure and does not believe that Jackson’s punishment is severe enough.